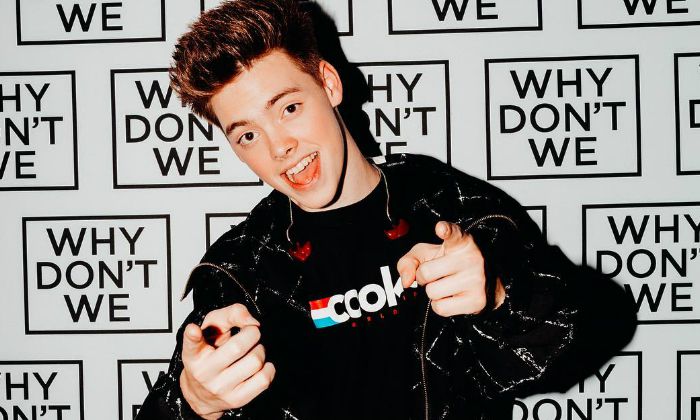 Who is Zach Herron?

Zach Herron is an American pop singer and songwriter who shot to prominence as a member of the boy band called Why Don’t We. He is the youngest member of the group. Having grown up in Dallas, Texas, Zach had always dreamt of becoming a musician and began posting covers on YouTube. Zach’s claim to fame began with a cover of Shawn Mendes’s “Stitches”, which went viral on YouTube, garnering over 10 million views in just over one week. That cover eventually boosted his singing career.

As a solo artist, Zach went on to release singles “Timelapse” and “Why” in the year 2016, both of which were well received by music fanatics. That same year, he joined “Why Don’t We”, the band which is probably known for the tracks including Only the Beginning (2016), Something Different (2017) and Invitation (2017) He is extremely popular on the photo-sharing app, Instagram, where he has over 2.5 million followers.

Zach Herron was born on the 27th of May 2001, in Dallas, Texas, United States of America. He is currently 18 years old.

Zach Herron is the oldest of three children to parents Myta and Josh D Herron. He has a younger brother, Ryan Herron and a younger sister, Reese Herron.

Zach Herron and fellow social media personality and singer Kay Cook dated for over a year from 2018 until their split in 2019.

Just like other aspiring singers, Zach Herron posted covers of popular songs to his eponymous YouTube channel, which now has almost 300 thousand subscribers. He uploaded his first cover song “I’m Yours” by Jason Mraz back in 2014 and he was quick enough to grab the attention of the netizens with the cover versions of Ed Sheeran, Bruno Mars, Chris Tomlin, and Shawn Mendes.

Zach dropped his first single, “Timelapse” in January of 2016 and later that year, he released his second single, “Why”, in May 2016.

After joining the boy band “Why Don’t We”, in September 2016, they released their debut EP, “Only the Beginning”, in November of that year.

He developed an interest in singing at a very young age. His passion for singing and performing in front of people landed him a spot in the school choir as well as he participated in numerous talent shows.

He became an internet sensation after a video of him singing the Shawn Mendes song “Stitches” at school in January 2016 went viral on social media. The video, eventually, accrued over 10 million views in just over one week.

Zach is best known as one of the lead singers of the boy band “Why Don’t We” and for his large following on social media.

In his illustrious career, Zach has earned a significant following on various social media platforms. He is very active on Instagram, where he has over 2.4 million followers. He can be found on Facebook @zachherronmusic and has already gained over 200 thousand followers.

His Twitter page @ImZachHerron has over 730 thousand followers. Almost 300 thousand people have subscribed to his self-titled YouTube channel which ultimately helped him launch his music career.

He started off at a very young age by singing in his school talent shows and later joined the school choir.

Zach became one of the youngest singers to get selected by the Septien Entertainment Group’s Master Select Program for up-and-coming young artists.

His fans are referred to as “Herronettes”.

Zach Herron has stated that Jon Bellion is one of his biggest musical influences.

He used to wear braces while he was young.

Though Zach is the youngest member of WDW, he became the first person to hit 1 million on Instagram.