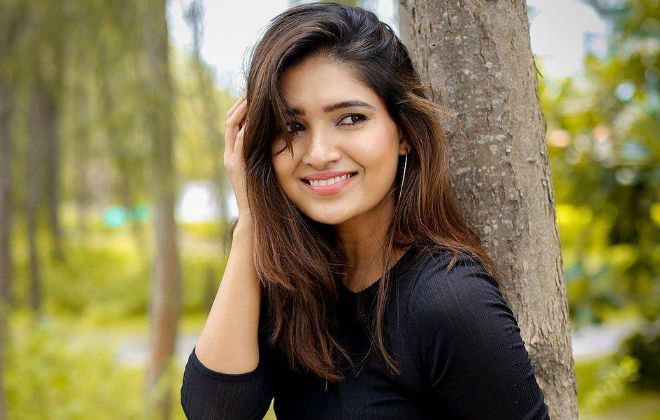 Who is Vani Bhojan?

Vani Bhojan is an Indian actress, model and television personality who became known for her role as Sathyapriya Prakash in the Tamil daily soap opera, Deivamagal, which ran from 2013 until 2018. She has starred in soaps like Aahaa, Maya and Lakshmi Vanthachu. In addition to her successful acting career, she stars as a judge on Star Vijay’s Kings of Comedy Juniors Season 2. The budding actress is very active on social media and she has amassed over 400k followers on Instagram.

Unfortunately, very less is known about her family background and personal life. Her father was a wildlife photographer. She has one older brother.

After graduating from school, Vani got admitted into the Government Arts College, Stone House Hill, Ooty, from where she earned her degree in B.A Lit (English).

Vani Bhojan made her feature film debut in 2018, playing a fisherwoman in a thriller film, N4.

Vani Bhojan earned her first acting role in 2012 with the Tamil daily soap opera ‘Maya’, in which she played the lead role of Maya.

She has leaped to nationwide fame with her role as Sathyapriya Prakash in the Tamil daily soap opera, ‘Deivamagal’, from 2013 until 2018.

Vani has appeared in no less than 150 TV commercials, including Pachiayappan Silks, Lion Dates, among others.

There’s not much known information regarding her net worth and salaries. However, she is one of the highest paid actresses in Tamil television industry. Her part in Sun TV’s Deiva Magal has catapulted her stardom as well as made her a household name in Tamil Nadu. She lives in Chennai.

After graduating from college, she moved to Chennai, where she worked as a flight attendant for King Fisher Airlines and Indigo Airlines.

It was her friend who suggested her to do modeling. And, in no time, she has created a niche for herself in the fashion world.

She has appeared in more than 150 TV commercials and print ads.

Besides being an actor, Vani is a trained yoga instructor who has even presented a TV show called ‘Yoga Program’

She is a fitness freak.