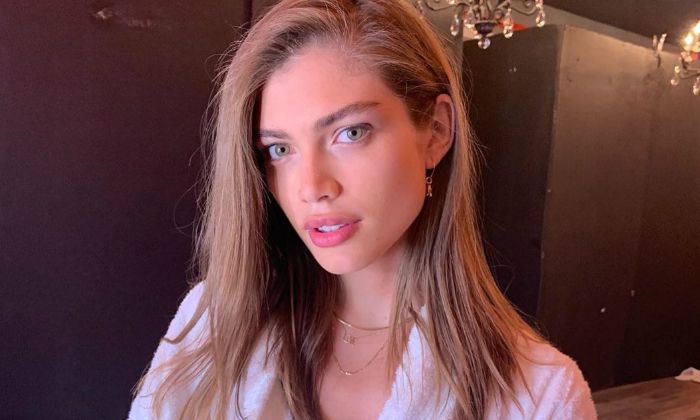 Who is Valentina Sampaio?

Valentina Sampaio is a Brazilian model and actress who made history as the first openly transgender Victoria’s Secret model. She garnered international fame when she posted a backstage photo of her in a bathrobe from a recent photo-shoot for the brand’s Pink line on Instagram in August 2019. In 2017, she skyrocketed to fame after appearing the cover of Vogue Paris and also became the first transgender model to grace the cover of Vogue’s international editions such as Brasil and German Vogue. She is known for her work with brands such as Moschino, L’Oréal, and Philipp Plein. In 2020, Sampaio became the first openly transgender model to appear in Sports Illustrated.

Valentina Sampaio was born on the 10th of December 1996 as a male in a fishing village in Aquiraz, Ceará, located in Northeastern Brazil. She is currently 23 years old.

Speaking about her personal life, very little has been revealed about her family and her childhood. Details about her parents are unknown but what is known regarding her parents is that her father is a fisherman, and her mother is a teacher. She has one younger sister.

After graduating from school, she enrolled at a college in Fortaleza to study architecture, but she dropped out when she was 16 to study fashion.

The skinny model is possibly single as she was never seen dating anyone publicly. She is reluctant and rarely opens about her private life. Furthermore, she has perpetually managed to keep her personal life away from the spotlight and it looks like that nothing has attracted her more than modeling.

Sampaio made her acting debut as Isabelle in the 2017 Brazilian film Berenice Procura.

In 2017, she appeared as herself in a Brazilian telenovela A Força do Querer.

Valentina Sampaio began modeling in her late teens. In a very beginning of her career, a clothing company ousted her from her first modeling campaign for her transgender identification. Perhaps, she never gave up her modeling ambitions and broke through tough barriers that came her way. Her dream came true when she walked the runway for the first time at São Paulo Fashion Week in November 2016.

In 2017, Sampaio made history as the first transgender model to appear on the cover of Vogue Paris and later appeared on both Vogue Brasil and Vogue Germany.

In August 2019, She made headlines after the lingerie brand Victoria’s Secret hired Sampaio for a catalog gig for VS Pink line. She eventually became the first transgender to work with the brand.

Sampaio has been an inspiration to many young people and transgenders in the fashion world who wants to achieve something big down the line. Being a first openly transgender model, Sampaio has come a long way with her career path filled with hecks and bumps.

According to sources, Valentina Sampaio has an estimated net worth of $500 thousand dollars as of 2020.

Though Sampaio was born male, she had always felt girly and loved to around girls when she was young. However, it was until the age of 8, when her parents took her to a psychologist who identified her as transgender.

Her parents are very supportive of her gender identification.

Unlike many other transgenders, Sampaio isn’t a victim of bullying at school, because according to her “her classmates were also very accepting because she said that “they already saw me as a little girl.”

She is represented by Women Management in New York, Paris and Milano, Joy Management Brazil and Elite Model Management UK.

Valentina has worked with brands such as Moschino, L’Oréal, and Philipp Plein.

She is very active on social media with a huge fanbase. She has over 400k followers on Instagram.