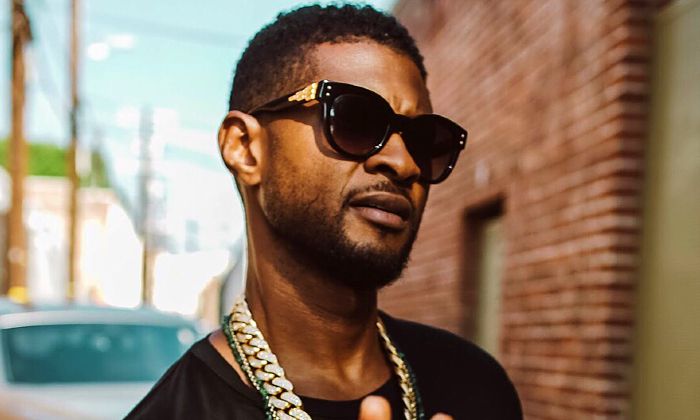 Usher is an award-winning R&B singer, actor, and dancer probably best known for his Billboard-200 number one albums “Confessions”, “Here I Stand”, “Raymond v. Raymond” and “Looking 4 Myself”. These four albums have collectively sold 27.5 million copies worldwide. With no doubt, he is one of the best-selling music artists of all time having sold 75 million records worldwide. He has been inducted into the Georgia Music Hall of Fame and Hollywood Walk of Fame and has won 8 Grammy Awards and 18 Billboard Music Awards. Usher has released eight studio albums so far, of which his fourth album Confessions sold 20 million copies worldwide, making him one of the best-selling musical artists of the 2000s decade. Usher’s acting claim to fame include “Hustlers”, “Incredibles 2”, “Muppets Most Wanted”, and “Scary Movie 5”, to name a few.

Usher was born on the 14th of October 1978, in Dallas, Texas, United States of America. He is currently 42 years old.

Usher is the only son of Jonetta Patton (O’Neal) and Usher Raymond III. His father left the family when he was barely one year old and he hasn’t met is estranged father since then.

He was raised by his mother and stepfather. He has a half brother from his mother’s remarriage. His paternal grandparents were Usher Raymond, Jr. and Evangelist Ernestine Berry.

Usher had a knack for singing from a very young age and at age six, he joined the local church youth choir in Chattanooga. Seeing his natural ability to sing, the family moved to Atlanta, Georgia for better opportunities.

There, he attended and graduated from North Springs High School.

Talking about his romantic life, Usher has had dated several women throughout his life, including singer and actress Rozonda ‘Chilli’ Thomas, British supermodel Naomi Campbell, and model Eishia Brightwell.

In February 2007. he got engaged with hair-stylist and wardrobe stylist, Tameka Foster, who was his personal stylist for several years. The couple married on August 3rd in a civil ceremony in Atlanta of the same year. They have two sons together, Usher “Cinco” Raymond V, (b. November 2007) and Naviyd Ely Raymond, (b. December 2008) apart from Foster’s three children from previous relationships. After spending three years together, Usher filed for divorce in June 2009 in Atlanta, which was finalized in Fulton County Court on November 4, 2009.

Usher tied the know with his long-time girlfriend Grace Miguel in September 2015 while vacationing in Cuba. In March 2018, they ended their nine years relationship (pre-and-post wedding) and it was mutual. Following their separation, he filed for a divorce from his ex-wife Miguel on December 28, 2018.

Usher got his start at the age of ten when joined the local R&B group NuBeginnings and recorded several songs. At age 13, he performed on the television show Star Search which led to a recording deal with LaFace Records.

Not long after, he recorded his first single “Call Me a Mack” for the movie Poetic Justice in 1993 and it was an instant hit. The following year, he released his debut self-titled album which peaked at No.25 on the Billboard Top R&B/Hip-Hop Albums chart. The album spawned three hit singles, “Can U Get wit It”, “Think of You”, and “The Many Ways”.

His second album “My Way” was quick enough to achieve platinum status with a total sales of 8 million records worldwide. It topped the Billboard Top R&B/Hip-Hop Albums chart with the single “You Make Me Wanna…” becoming the first song to go platinum. The single “Nice & Slow” and “My Way” followed the suit.

Usher achieved international stardom status with his fourth album “Confessions” which was released on March 23, 2004. It was his first and the only album to achieve a diamond status and earned him three Grammy Awards. With over 20 million records sales globally, the album spawned four number-one singles – “Burn,” “Confessions Part II”, “Yeah!” featuring Lil Jon and Ludacris and “My Boo” with Alicia Keys.

In addition to the chart-busting albums, Usher is also known for his acting abilities. He landed his first acting role on the UPN television series Moesha, playing the role of Jeremy Davis, and subsequently won his first film role as Gabe Santora in 1998’s The Faculty.

With no doubt, Usher is one of the most successful and the best selling artist of our time, who has sold over 40 million albums globally. His life is already a success story. All that album sales, endorsements, on-screen appearances, and various other business endeavors have resulted in a net worth of $180 million, as of 2020. Having said that, Usher is one of the richest recording artists out there.

Having spent his entire childhood in Chattanooga, Tennessee, Usher moved to Atlanta, Georgia when he was 12 years old to pursue a career in music.

Usher is a co-owner of the NBA team Cleveland Cavaliers.

On September 7, 2016, he was inducted into the Hollywood Walk of Fame.

He is the godson of actor Ben Vereen.

He is a feminist.

Apart from owning a record label called US Records, Usher is involved in several entrepreneurial endeavors, including several restaurants, a fragrance line, and also has invested in several companies.

Usher has his own charity called New Look Foundation that aims to provide funding for children in foster care and service programs.

Billboard named him the second most successful artist of the 2000s.