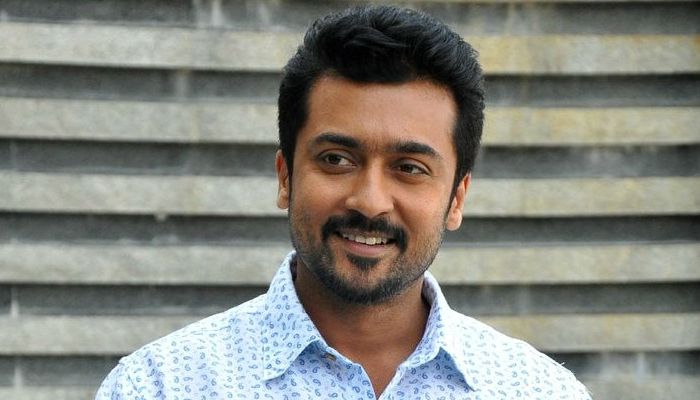 Saravanan Sivakumar, popularly known by his screen name Suriya, is a prominent actor in the South Indian Film Industry. Suriya, son of legendary actor Sivakumar, ventured into showbiz in 1997 with Nerukku Ner. His breakthrough role in Nandha came in 2001 with Bala’s action drama film of the same name. From there, there is no turning back for the actor, quickly achieved stardom status following the success of films such as Kaakha Kaakha (2003), Pithamagan (2003), Ghajini (2005), Vaaranam Aayiram (2008), Ayan (2009), Singam trilogy, to name a few. He is the recipient of three Tamil Nadu State Film Awards and four Filmfare Awards South.

Suriya is the eldest son of Tamil film actor Sivakumar and his wife Lakshmi. He has two younger siblings, Brindha and Karthik Sivakumar, who is also an actor.

Suriya attended The PSBB Millennium School in Coimbatore and then went to the St. Bede’s Anglo Indian Higher Secondary School in Chennai.

After completing his schooling, he earned a bachelor’s degree in commerce from Loyola College in Chennai.

Suriya began dating his co-star Jyothika in 1999 and they have worked together in several films. They got married on September 11, 2006, in Chennai. They have two children together, a daughter named Diya (born 10 August 2007) and a son named Dev (born 7 June 2010).

Suriya made his acting debut in the Tamil action film, Nerrukku Ner, starring Vijay, which was directed by Vasanth in 1997.

In 2012, he became the host of the reality game show,  Neengalum Vellalam Oru Kodi, on Vijay TV.

In 2007, Suriya was appointed the brand ambassador of the Tanker Foundation and acted in a short film on AIDS awareness. Suriya launched Agaram Foundation in 2008 and has since helped school dropouts in Tamil Nadu to further their education.

In 2013, he was honored at the Edison Awards as the Best Male Endorser in South India.

One of the most popular and promising actors of K-Town, Suriya has an estimated net worth of US$25 million as of 2020. Though acting is indeed his main source of earning, he is also a celebrity endorser who has had endorsed various brands amongst South Indian actors. It is estimated that the pockets Rs 4 – 5 crores annually from endorsements. Suriya has his own production company called 2D Entertainment, which is best known for producing quality films and has been successful raking in millions of bucks.

Undoubtedly, Suriya is one of the highest-paid actors in the Tamil film industry. In 2016, he paid Rs 8 crore in taxes alone. He lives with his family in a luxury home, located in T. Nagar, one of the busiest and crowded places of Chennai. He purchased this house 2009 for a staggering undisclosed amount. He is a huge fan of exotic cars who has an impressive collection of cars in his garage including cars form brands like Audi, BMW, Jaguar and owns a Ducati Monster 767.

His stage name, Suriya was given by ace director Mani Ratnam as there was another actor by the name Saravanan.

Suriya worked as a merchandising manager in a garment factory for 3 years before stepping into cinema.

Besides acting career, he is also a singer, dubbing artist, film distributor, and producer. He crooned a song “EK Do Dheen Char” with Andrea Jeremiah for Anjaan.

Suriya is well acclaimed for his humanitarian efforts. His Agaram Foundation, which he found along with his wife, aims to provide education to school dropouts.

Even though Suriya is an established actor in the business today, he hasn’t received awards like many other actors in the industry. He won Filmfare Award for Best Supporting Actor – Tamil in 2003 for Pithamagan.

His biggest dream is to direct a film on his own, for which he has been learning film making, editing, re-recording and etc.

He never takes sweets (Nah! even a bite).