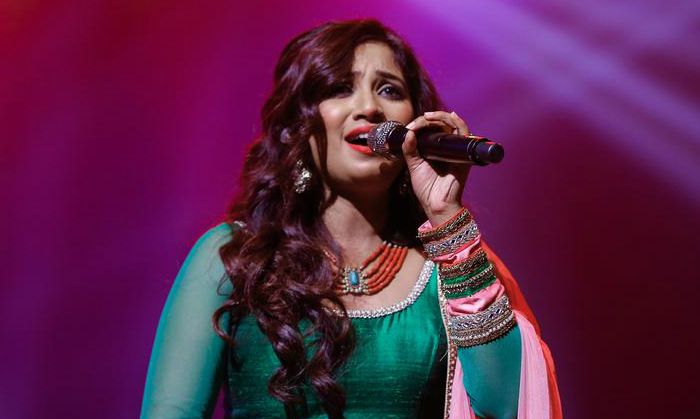 Who is Shreya Ghoshal?

Shreya Ghoshal is a famous playback singer and television personality. She has recorded hundreds of film songs as well as independent albums in various Indian languages. She is one of the finest singers of the Indian film industry who has received several accolades and honors from across the world. Ghoshal is the first Indian singer to have a wax figurine in Madame Tussauds Museum. She has been honored by the United States state of Ohio, where Gov. Ted Strickland declared 26 June 2010 as “Shreya Ghoshal Day”.

Shreya Ghoshal was born on the 12th of March 1984, to a Bengali Hindu family in Murshidabad, Murshidabad district, West Bengal. She is currently 36 years old.

Shreya Ghoshal is the daughter of Bengali parents Bishwajit Ghoshal and Sarmistha Ghoshal. Her father is an electrical engineer and works for the Nuclear Power Corporation of India while her mother is a literature post-graduate. She has a younger brother, Soumyadeep Ghoshal.

Shreya attended the Atomic Energy Central School in Rawatbhata up to 8th grade. At the age of 11, she won the All India Light Vocal Music Competition in the Light Vocal group at the sub-junior level.

She moved to Delhi and completed her schooling at the Atomic Energy Central School in Anushakti Nagar. She then joined the Atomic Energy Junior College to study science, however, she left the college in her freshman year and enrolled at the SIES College of Arts, Science, and Commerce in Mumbai, where she majored in arts with English.

Shiladitya Mukhopadhyaya – Shreya and Shiladitya Mukhopadhyaya were childhood friends and dated for more than 10 years before getting married on February 5, 2015. Her personal life has always been subject to media attention, and there were reports that she got pregnant before her marriage. However, she denied them saying they are baseless.

She first released her studio album tilted, Bendhechhi Beena, on 1 January 1998, with 14 tracks.

Shreya Ghoshal participated in the singing reality show, Sa Re Ga Ma (now Sa Re Ga Ma Pa) in 2000 and won the season’s title. That victory marked a stepping stone in her music career. Ace filmmaker and music director Sanjay Leela Bhansali identified her singing talents and introduced her to the entertainment industry.

She has appeared on many reality shows as a contestant as well as judges including STAR Voice of India, X Factor India, and Indian Idol Junior, to name a few.

Shreya Ghoshal has featured on a number of television commercials and print ads. She has been the face of Joyalukkas and also crooned a number of songs for TVCs.

Shreya Ghoshal owns a few luxury cars including a BMW 7 Series, Audi A8, and a Mercedes Benz SUV. She lives in a lavish house in the posh area of Kolkata. She also owns several real estate properties in Mumbai and Kolkata.

The Queen of Bollywood music has a net worth of $25 million. She charges Rs 10 lakh upwards per song and obviously one of the wealthiest singers in the country. She has a great sense of fashion and style when it comes to clothing, and is often considered as the elegant singer in the industry.

Ghoshal is one of the most followed celebrities on a variety of social networking sites and has garnered more than 28 million likes on Facebook. She also has a considerable amount of following on the photo-sharing app, Instagram and Twitter. Follow her on:

Shreya started taking music classes at the tender age of 4. And, at 6, she started learning classical music from Padmashree Late Kalyanji Bhai and Late Mukta Bhideji. At 16, she performed in a television reality show and got noticed by Bollywood musicians.

Ghoshal has performed a number of concerts throughout the world. She is the second Indian singer after Lata Mangeshkar to have performed live at the Fox Theatre in Detroit.

With a career spanning more than 15 years, she has worked with all of the big names in the entertainment industry and inspires thousands of young aspiring singers with an enchanting voice.

Shreya can reach high up to six octaves and what makes her unique among her counterparts is that her versatility.

Ghoshal is referred to by the media as ‘Melody Queen’, ‘Queen of Melody’, ‘Queen of Hits’, ‘Queen of Bollywood Music’, ‘Nightingale’, ‘Queen Bee’, ‘Bollywood Playback Queen’, and ‘Undisputed Queen of Singing’.

She would have become an astronaut or a genetic engineer if not were a singer.

She has a dog named Sherlock, which also has a Twitter handle.

Several film producers and directors have approached her to cast her in their films, but she politely refused all of them.