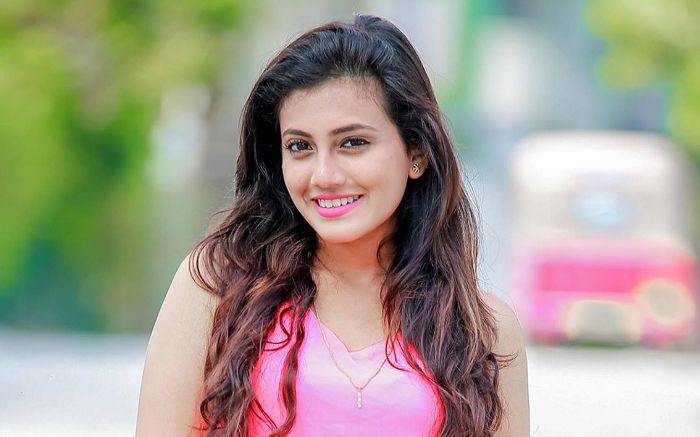 Shanudrie Priyasad is a young, talented and dazzling actress from Sri Lanka and one of the most recognizable faces in the film industry. She is best known for her portrayal of Samalka Samadhi in the daily soap, Deveni Inima. Her film credits include Rosa Kele, Suwanda Danuna Jeewithe and Angara Dangara. She is also a television personality and model. Being the youngest of Priyasad Sisters, both her elder sisters, Dinakshie Priyasad and Sheshadrie Priyasad are actresses and television personalities. Shanudrie attained stardom status at her young age when she appeared in the television series, Sandagiri Pawwa, playing the role of Anula, which earned her State Television Awards for Best Child Actress.

Shanudrie Priyasad was born on the 8th of September 1997, in Boralesgamuwa, Western, Sri Lanka. She is currently 22 years old.

For education, She attended the Colombo Royal Institute.

The dusky actress is currently single as she was never seen dating anyone publicly. Shanudrie is quite reluctant and rarely opens about her private life. Furthermore, she has kept her personal life away from the spotlight.

Shanudrie Priyasad made her theatrical film debut when she was three and a half years old in her father’s film, Omna Babo.

She is currently appearing in the teledrama, Deveni Inima, playing Samalka Samadhi which premiered on  Derana TV on 6 February 2017. The series has been nominated for various awards in multiple categories, however, Shanudrie hasn’t yet bagged one for her.

Being one of the popular artists in the Sri Lankan entertainment industry, Shanudrie Priyasad makes tons of money from films and television appearances.

With no doubt, Shanudrie has quite a social media presence. She can be found on Instagram @shanudrie, where she’s got over 680,000 followers. Her Facebook page @ShanudrieOnline is being followed by over 250,000 followers, while her Twiter account has over 6500 followers. She is also on YouTube, with over 33 thousand people subscribed to it.

Shanudrie is the youngest of three siblings.

Though Shanudrie is a popular personality in the industry, she actually wanted to become a banker.

In addition to acting skills, she is also a great dancer and singer.

Her song titled, ‘Mal Sihinaya’ is very popular among television audiences. She has also appeared in the original ‘Mal Sihinaye’ music video