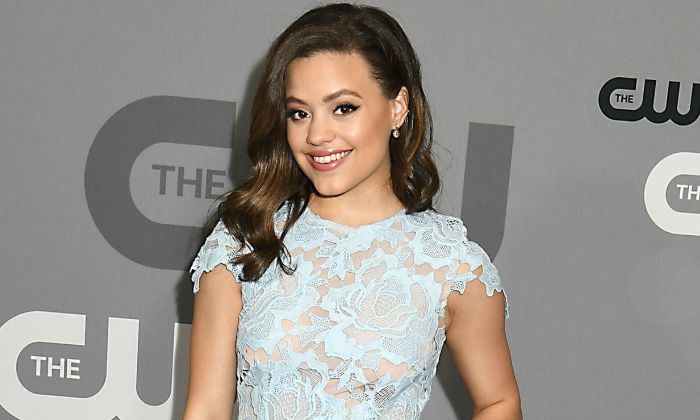 Who is Sarah Jeffery?

Sarah Jeffery is a Canadian actress and singer who came into the limelight after her recurring role as Amy Breslow in the first season of Fox’s mystery series Wayward Pines. She later went on to play the character Princess Audrey in the Disney original television movie Descendants and provided her voice to the same character in Disney’s animated series Descendants: Wicked World from 2015 to 2017. Since 2018, she’s playing the role of Maggie Vera in the fantasy drama series Charmed.

Sarah Jeffery was born on the 3rd of April 1996, in Vancouver, British Columbia, Canada. She is currently 23 years old.

Sarah Jeffery is the daughter of actor Lee Jeffery and Teresa M Jeffery. She has two sisters, Hannah and Nyla Jeffery. Her father is African American and her mother is of English and Native American ancestry.

Sarah Jeffery intends to abstain from sharing any information about her personal life to the media. Thus not much is known about this stunning beauty. However, rumors sparkled and made rounds on the internet in 2016 about Sarah hooking up with Justin Bieber after they were seen together at Jennifer Lopez‘s housewarming party in Las Vegas.

Sarah landed her first major acting role in the rom-com movie Be Somebody in 2016, in which she played the role of Emily Lowe.

Sarah’s first television appearance was in the unsold pilot of Cartoon Network’s Aliens in the House in the year 2013. That same year, she was cast in the DirecTV original series Rogue, playing the daughter of Thandie Newton as Evie Travis. She appeared from season one to season 3 as a main character of the series.

As a singer, Sarah released her debut single entitled Ghosts of Our Past (feat. Sarah Jeffery) in collaboration with the band Derrival. She has also crooned the song “Set It Off” in the 2015 movie Descendants. The song was released under the label Walt Disney Records.

Despite starring in a handful of television shows, Sarah earned critical acclaim and appreciation for her work as Amy Breslow in Wayward Pines and playing the lead role of Princess Audrey in Descendants franchise. In 2015, she was nominated for Leo Awards in the category “Best Supporting Performance by a Female in a Dramatic Series” for her performance in the TV series Rogue.

Sarah started singing, dancing and acting in musicals and theatrical productions at the age of three years old.

She is an accomplished dancer and a member of a dance crew known as Body.

Sarah adopted vegan lifestyle in 2016 and was part of Peta2 campaign called “Angels for animals”. She is also a member of Peta2.

She became the face of National Women’s History Museum in 2018.

Sarah wanted to be a dentist before becoming an actress.

She splits her time living between Los Angeles and Vancouver.

She has a pet pug dog.