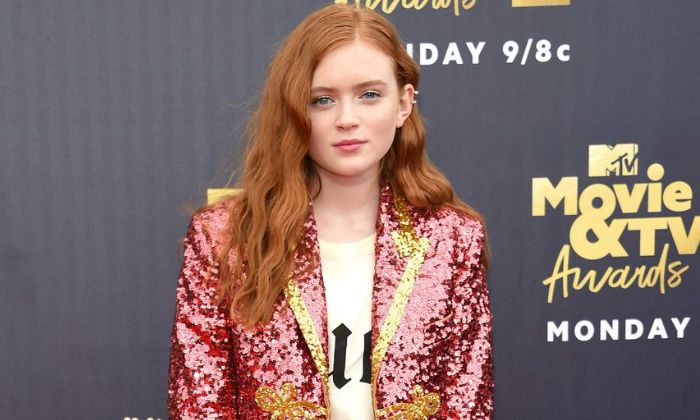 Who is Sadie Sink?

Sadie Sink is an American actress who grabbed the spotlight with her portrayal of Maxine “Max” Mayfield in Netflix’s Stranger Things. She is also known for playing one of the lead roles, Suzanne Ballard, in NBC’s thriller series, American Odyssey in 2015. In addition to her breakthrough roles, she has also appeared in both television and film, with credits including The Americans, Blue Bloods, Unbreakable Kimmy Schmidt, Chuck, The Glass Castle, Eli.

Sadie Sink was born on the 16th of April 2002, in Brenham, Texas, United States of America. She is currently 17 years old.

Sadie Sink was born fourth of five children to parents Lori Elizabeth Sink née Baughman and Casey Adam Sink, who is a mathematics teacher and an offensive line football coach. She has three older brothers named Caleb, Spencer and Mitchell Sink and a younger sister, Jacey Sink. Sadie’s maternal grandmother was also a teacher whose name was Kay Baughman. Her great-grandparents were Joseph Edward “Joe” Sink and Betty Joyce O’Brien.

Sadie is presumed to be single as she is not dating anyone or hasn’t shared anything about the romantic part of her life to the media. It seems that the young and bubbly actress is not ready for a relationship as she’s focused on her career.

Sadie Sink made her acting debut with a biographical sports drama film, Chuck in 2016. She was cast in a supporting role as Kimberly in the film which had Liev Schreiber in the lead role.

Sadie’s first television appearance as an actress came in 2013 when she guest appeared Lana in one episode of the Emmy-winning spy thriller series, The Americans.

She played the role of Annie, the lead character, in the 2012 revival of Annie. She was only 10 years old when she auditioned for the role. Sadie was initially selected for a supporting role but eventually landed a lead role when the original actress left the show.

Talking about her notable works, she has mostly appeared in big projects throughout her career. However, it was her role in the Netflix science fiction horror series, Stranger Things earned her immense popularity and fame. She was a huge fan of the series even before she would ever think that she would be part of the project someday. She gave audition for the role of Maxine “Max” Mayfield in September 2016. Luckily, she was picked up for the role but had to undergo a slight physical transformation and also took skateboarding classes to get intact with the character.

The budding damsel has appeared in a number of TV commercials for brands like Nike, Miu-Miu, Clean & Clear, and Stony Brook children’s hospital.

Saddie got interested in acting at a tender age. She used to recreate Disney’s High School Musical with her brother, Mitchell. Her mother put her and her brother in a community theatre, in nearby Houston.

She landed in a Broadway production called Annie at the age of 10, which happened to be her first acting exposure. She was lucky enough to be cast in the play as her first acting job which could never happen that easily to anyone.

Sadie played supporting roles in television shows and films before she earned her mainstream break with Stranger Things.

She played the part of a young Queen Elizabeth II alongside Helen Mirren in the Broadway play called The Audience (2015) at the age of 13.

She is a huge fan of actress Emma Stone.

Sadie turned vegan after she met actor Woody Harrelson on the sets of her film The Glass Castle. She became friends with Woody on the set and was greatly influenced by his environment-friendly lifestyle.