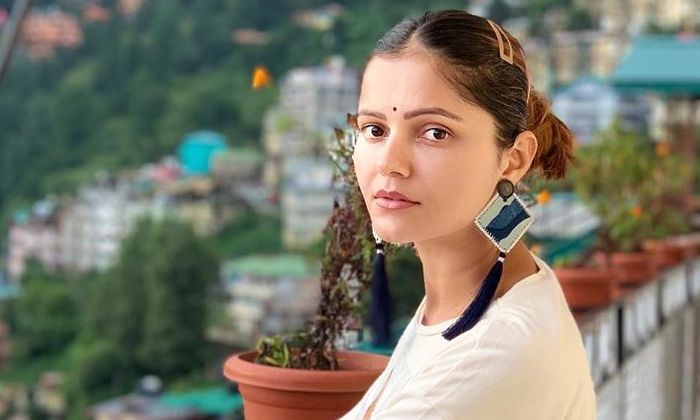 Who is Rubina Dilaik?

Rubina Dilaik is an Indian television actress and reality TV star who rose to fame with Zee TV’s Chotti Bahu and Color TV’s Shakti – Astitva Ke Ehsaas Ki. She won an Indian Television Academy Award in the Best Actress Drama (Jury) category for her role in the latter in 2016. She’s also a former beauty queen and won miss Shimla in 2006 and Miss North India Pageant in 2008.

Rubina is also a fitness enthusiast known for her distinctive hourglass body. She’s never afraid to show off her elegant and toned figure as she often shares pictures of herself in provocative outfits on her Instagram where she has over 2.4 million followers. In 2017, she was awarded the Most Fit Actress Award.

Rubina Dilaik is the daughter of Gopal Dilaik, a writer, and Shakuntla Dilaik. She’s the eldest of three siblings and grew up with her two sisters, Rohini and Naina, in Shimla, Himachal Pradesh, where the family owns an Apple orchard. Her father has authored many books in Hindi.

She’s a college graduate having attended Shimla Public School and St. Bede’s College, which is located in Shimla.

Rubina Dilaik is married to her longtime boyfriend and television actor, Abhinav Shukla, since 2018. The couple started dating soon after they met each other at a mutual friend’s house during Ganpati Visarjan in 2015. They got married on June 21, 2018, in a modest wedding ceremony in Shimla, Himachal Pradesh.

She was previously in a relationship with actor Avinash Sachdev.

Rubina Dilaik kickstarted her acting career by playing the role of in the role of Radhika Shastri on Zee TV’s most popular soap opera Chotti Bahu (2008-2010). She made an impact among the television audience with her stellar performance that eventually helped her to establish herself as one of the leading actors in the Indian television industry.

Since her early roles, Rubina has transformed herself into a prominent face on the small screen. She has been a part of several television soap operas, including Saas Bina Sasural, Devon Ke Dev…Mahadev, Jeannie Aur Juju, and Shakti — Astitva Ke Ehsaas Ki.

In 2020, She and her husband, Abhinav Shukla, appeared on the 14th season of Salman Khan’s hit reality show, Bigg Boss.

Rubina is already enjoying a successful career as an actress, thanks to her remarkable roles in Chotti Bahu and Shakti – Astitva Ke Ehsaas Ki. She has a huge online presence with more than 2.4 million Instagram followers and 110 thousand Twitter followers. She can be also found on YouTube, where she has amassed more than 132 thousand subscribers on her self-named channel.