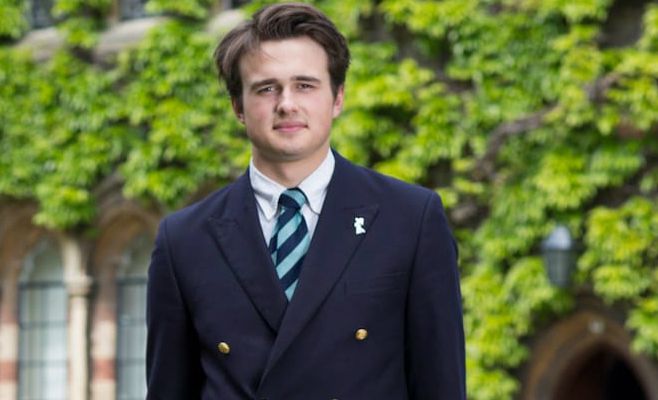 Who is Rory Farquharson?

Rory Farquharson is a British socialite and student who came into the limelight in the fall of 2017 when a video of him and Malia swirled around the internet. In the video, Rory was seen kissing her while she wrapped her arms around him. Since then, the two were spotted together on several occasions. He joined Harvard University in 2017, the same school Malia attends.

Rory Farquharson was born in the year 1998 in the United Kingdom. He is currently 21 years old.

Rory Farquharson comes from a British Royal family. His father, Charles Farquharson, is the chief executive of ‘Insight Investment Management Limited’ in London. His mother, Catherine, is a certified accountant and serves London’s ‘Upper Tribunal.’

Rory’s second cousin, Andrew Farquharson, has served as the Queen’s “Assistant Master of the Household” at ‘Buckingham Palace.’ Andrew then became an aide to Prince Charles.

Farquharson attended an English private school, Rugby School in England. He was the head boy for the year 2015-16 in an £11,584-a-term boarding school.

Rory is studying law at Harvard University, in Cambridge, Massachusetts, last autumn. He spent his last summer as an intern with the Centre for Democracy and Peace Building in Northern Ireland.

The 21-year old became famous after he was spotted kissing ex-President Barack Obama’s eldest daughter, Malia Obama at the Harvard v Yale American football game. A video of them went viral and doing rounds on the internet where Malia is seen smoking a cigarette and smiling before wrapping her arms around Rory before going in for a kiss.

Being the son of Charles, 57, who is the chief executive of Insight Investment Management Limited based in London, Rory has inherited incredible wealth from her parents. Based on his tweets, he got interested in a banking career, and apparently, his family has roots of royal blood. He is worth millions of dollars whose net worth is explicitly unknown. He lives with his family in a six-bed detached home in Woodbridge, Suffolk, worth £1.6 million.

This English lad has deleted his social media accounts after he hit the headlines of several leading publishers as he doesn’t want to reveal his identity to the outside world.

Born in a wealthy family, Rory Farquharson was brought up in his hometown.

During his high school, he was good at golf and rugby and also was a member of his school team.

He was a member of the Rugby School’s chemistry club, the Blue Bunsen Society.

His cousin, Andrew Farquharson, was one of Her Majesty Queen Elizabeth II​’s most trusted aides and was head of her entertainment team organizing events from state budgets to summer picnics in Balmoral​ for a decade.

Rugby schoolmate Mstislav Kochkin describes Farquharson as “a nice guy, a good student, and a good friend. He was sometimes a bit arrogant and quite popular with the ladies.”