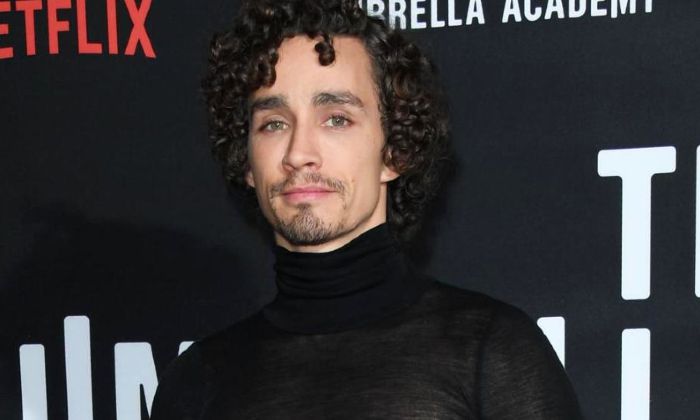 Who is Robert Sheehan?

Robert Sheehan is an Irish actor who is immensely popular in his home country, perhaps known for vowing the audience with every role he takes on. He’s probably best known for his performances in such TV shows as Misfits as Nathan Young, Love/Hate as Darren as well as for his portrayal of Billy in Me and Mrs. Jones. When it comes to big-screen appearances, he’s credited with Mortal Engines and The Mortal Instruments: City of Bones. In 2019, Robert began playing Klaus Hargreeves in The Umbrella Academy.

Robert Sheehan was born on the 7th of January 1988, in Portlaoise, County Laois, Ireland.

Robert Sheehan is the youngest child to Joe Sheehan and Maria Sheehan who was a garda. He has two elder siblings, a brother, Brendan and a sister, Shauna.

He was educated at St Paul’s School in Portlaoise, during which time he learned to play different musical instruments like the banjo and the bodhrán and even appeared in school plays.

As a teenager, he took acting seriously, and upon deciding to pursue his dreams, he enrolled at the Film and Television at Galway-Mayo Institute of Technology and majored in film and television. During this time, he also performed stand-up comedy in Ireland.

As far as his personal life is concerned, Robert Sheehan has dated quite a few women over the years. Though the actor’s current relationship status has not been divulged to the public, he was romantically involved with actresses Taylor Kranzle, Leonie Kranzle, and Sofia Boutella.

Before Robert even though of becoming an actor, he dabbled in music and was involved in it throughout his school life. He credits his mother for having succeeded in the industry he dreamed of. He was accompanied by his mother to auditions.

Robert won his first acting gig in the movie “Song for a Raggy Boy” (2003), which is about an oppressive school for boys during World War II. After that, he set his eyes on television and eventually made various guest appearances before landing a part in the science fiction series Misfits (2009). This is his first major role which earned him a lot of fame and recognition.

While he was filming the Misfits TV show, Robert landed the role of Darren in crime drama series Love/Hate. He then went on to appear in TV shows Me and Mrs. Jones, Fortitude and Genius: Picasso. Most recently, he was cast in the Netflix Original series The Umbrella Academy as Klaus Hargreeves. Through his acting works, Robert has found a place in every Irish household.

Yet of all Robert’s career accomplishments the one that landed him in the spotlight was his role on the hit TV series Misfits. Thanks to his various professional endeavors, Robert Sheehan’s net worth in 2020 is estimated to be around $2.5 million. His success in the entertainment industry is nothing short of inspirational.