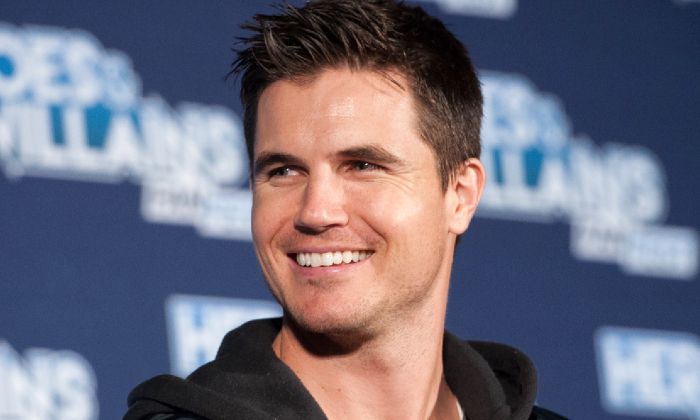 Who is Robbie Amell?

Born and bred in Toronto, Ontario, Robbie Amell first shot to prominence for his role as Jimmy Madigan on Nickelodeon’s True Jackson, VP. He gained further fame as an actor when he played Stephen Jameson on The CW series The Tomorrow People and Ronnie Raymond/Firestorm on The CW series The Flash. He played Fred Jones in two Scooby-Doo! television films. Robbie’s film credits include Paxton Flynn in The Hunters, Wesley Rush in The DUFF, Max in The Babysitter film series, and Jared in Desperados.

Robbie Amell was born on the 21st of April 1988, in Toronto, Ontario, Canada. He is currently 32 years old.

Robbie Amell is the youngest son of Jo (Burden) and Rob Amell, both involved in the custom jewelry business. He has an older sister. They both started their career at the same time and appeared in several commercials and modeling gigs together.

He attended and graduated from Armour Heights Public School in 2000. As he forayed into the entertainment industry at a very young age of five, he spent most of his early life appearing in television commercials and modeling gigs and also actively involved in school productions.

Robbie appeared in high school plays such as Louis and Dave and Fionia, Picasso at the Lapin Agile and The Importance of Being Earnest. He later attended Canadian Studios Acting Academy to hone his acting skills and then enrolled at Lawrence Park Collegiate Institute from where he graduated in the year 2006.

Robbie Amell is married to his long-time girlfriend and actress Italia Ricci. The couple started dating in July 2008 and became engaged on August 20, 2014. Two years later, the couple tied the knot married on October 15, 2016. Ricci gave birth to her first child, a son, Robert Amell (V), on September 12, 2019.

Robbie Amell was introduced to the show business while he was still a child at the tender age of five. He started off with commercials and modeling gigs and later acted in school plays. Having shown interest in acting right from his young age, he took acting lessons before securing theater roles at Lawrence Park Stage in plays such as Louis and Dave, Picasso at the Lapin Agile and The Importance of Being Earnest.

He landed his first-ever feature film gig at the age of 15 when he booked the role of Daniel Murtaugh in Adam Shankman’s comedy film, Cheaper by the Dozen 2 (2005). He starred alongside Steve Martin, Bonnie Hunt, Hilary Duff, Piper Perabo, and Alyson Stoner.

In 2006, he debuted on television with The CW drama series, Runway, where he guested in one of the episodes as Stephen. It just took three years to get on the radar and ended up really cool roles in major television series, including Nickelodeon’s True Jackson (2008–2011), in which his character Jimmy Madigan is portrayed as love interest of True Jackson (played by Keke Palmer), the series title character.

In 2019, Robbie starred in the science fiction film, Code 8, as Connor Reed and was cast as Nasim Pedrad’s friend in the Netflix comedy film, Desperados, in 2020.

He learned Muay Thai (a martial art) and break dancing.

He’s involved with the One Heartland charity, which helps children with HIV and AIDS.

Having been in the industry for more than 15 years, Robbie Amell has enjoyed a tremendous amount of success. Robbie has earned $2 million in net worth, thanks to all of his accomplishments that he has made so far in his career.