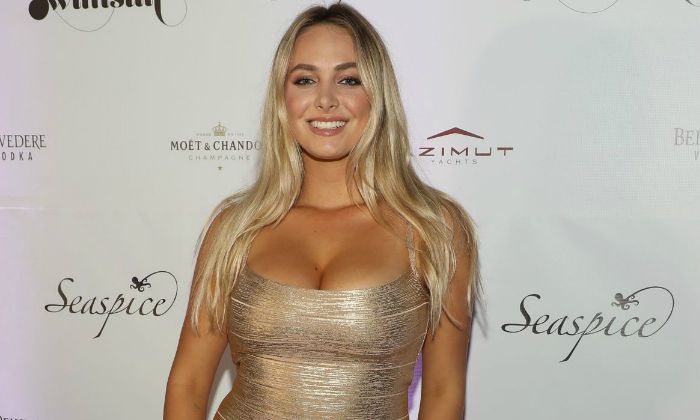 Who is Raine Michaels?

Raine Michaels is an American model and actress who caught the spotlight after landing a coveted spot in the 2019 Sports Illustrated Swimsuit edition. Indeed, she needs no introduction as she’s already gaining momentum in the glamour world, thanks to her parents, rockstar Bret Michaels and actress Kristi Gibson. The blonde, curvy and fit college student got signed by a modeling agency when she was just 16 years old. To her, modeling isn’t just another profession, but it is her passion, desire, and dream, for which she has been shaping herself since she was young. Raine has also appeared in movies such as ‘The Last Sharknado: It’s About Time’ (2018), ‘The Making of Bret Michaels’ (2002) and ‘The Apprentice’ (2004).

Raine Michaels was born on the 20th of May 2000, in Los Angeles, California, United States of America. She is currently 19 years old.

Raine Michaels is the oldest daughter of rockstar Bret Michaels and actress Kristi Gibson. Her father, Bret, is a singer and musician, known as the lead singer of the glam metal band, Poison. On the other hand, her mother, Kristi, is a former model and actress. She has a younger sister named Jorja Bleu Michaels, born on May 5, 2005, who is also an actress. Her parents separated in July 2012 before being in an on-again, off-again relationship for over 16 years. Even though they are separated, they were very supportive of her in her career and they also put their collective efforts to make her a model.

Speaking about her education, Raine attended Oaks Christian High School in Westlake Village, California. After graduating from high school, she enrolled at Belmont University in Nashville, Tennessee where she is a full-time student studying sports journalism and broadcasting.

Speaking about Raine Michaels personal life, it is known that she dated football player Matt Coral during her high school years. As per sources, they both broke apart in sometime in 2018. She revealed that she’s single in August 2018.

Raine Michaels made her acting debut with a small-time role in the 2018 film ‘The Last Sharknado: It’s About Time.’

Raine Michaels appeared on television for the first time in 2009 when she guest appeared as herself on E! True Hollywood Story.

She made her runway debut in August 2018 when she walked the ramp during the Sports Illustrated Swimsuit show in Miami.

Raine gained significance after being featured on the Sports Illustrated‘s Swimsuit Edition in 2019.

Following the footsteps of her mother, Raine decided to become a model when she was young.

She got signed to an agency called One Management when she was just 16 years old.

It is a dream for every aspiring model to be featured on the SI Swimsuit Edition. And, Obviously, it’s a dream come true for Michaels when she made it through the Top 6 finalists for the Swimsuit model search.

In an interview, she revealed that it was her dream to get a spot on the Sports Illustrated since she was 13 years old.

She has cited that Kate Upton is her biggest role model.

She has a CorePower Yoga membership.