Felix Arvid Ulf Kjellberg, popularly known online as PewDiePie, is a happening YouTube star in the world of internet. He makes videos out of video games (Yeah! if you are a video gamer, there is no way that you would missed him), Vlogs and Let’s Play commentaries. With more than 57 million subscribers and 16 billions views as of November 2017, his YouTube channel ‘PewDiePie’ is the most subscribed channel on the planet. He is the richest YouTube star on Earth as of now, and its unbelievable wealth comes from YouTube and brand endorsement, by posting videos of himself playing video games.

PewDiePie was born on 24 October 1989, in Gothenburg, Västergötland and Bohuslän, Sweden.

He is currently 28 years old.

He then enrolled at the Chalmers University of Technology to pursue a degree in industrial economics and technology management. In 2011, he dropped out of the college to pursue a career on video making.

Felix Kjellberg has been dating a fellow YouTuber, Marzia Bisognin since 2011. The came to know each through their mutual friend Diazo. The two shuffled between Sweden and Italy, before settling in Brighton, Sussex, England. 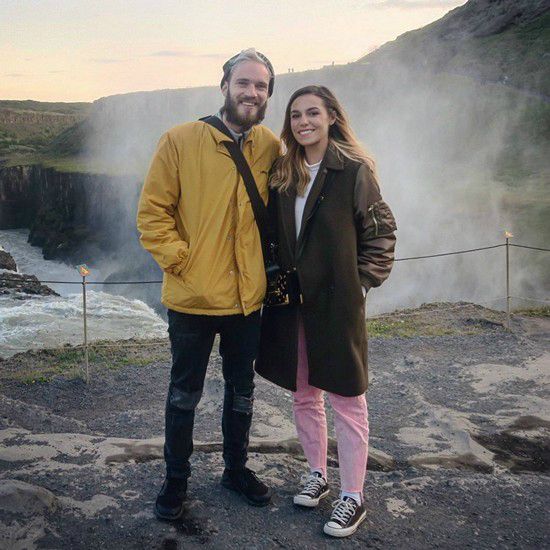 In 2015, he appeared in his first action-adventure theatrical film Tomorrowland for his uncredited role as PewDiePie.

His first TV appearance came in the form of an interview in a 2-episode series on Sveriges Television in 2012.

Felix has had been associated with Legendary Pictures, Mountain Dew, Dying Light.

PewDiePie is the most celebrated celebrity on the video uploading platform in terms os popularity and money factor. He’s the most earning person out of the platform.  In 2013, PewDiePie was named to be the highest paid YouTube star in the world with earnings of $12 million. In 2014, his earnings topped US$14 million. In 2015, he earned $9 million. In 2016, PewDiePie made a cool US$15 million, which is up 20% from his previous year earning. Not only that, his other business ventures include his own video production company, PewDie Productions AB that roughly made US$7.5 million in 2014. This YouTube star has an estimated net worth of US$21 million as of 2017.

It is reported that Felix Kjellberg pays 45% of his incomes as taxes to the Swedish government. His YouTube earning was sizeable and even wow, and roughly, he has made US$50 million off YouTube since 2014. Obviously, his source of income include YouTube ad revenue, advertisements, endorsements and sponsorship.

At the same time, Felix is also known for his generous charitable efforts, has raised several million dollars through charity campaigns on YouTube and donated to charity works. He had also given away millions of dollars in charity. He owns a Porsche 911 worthy of $123,650.

He launched his YouTube Channel, PewDiePie on the 29th of April 2010. His first video was a Minecraft playthrough.

After his parents refused to support his fledgling YouTube career, he took to working at a hot dog stand to raise funds for his work.

PewDiePie’s other miscellaneous jobs include working as a captain at the harbor and doing menial work on the tennis court.

His channel has grown over the years, which is now the no. 1 channel on YouTube with over 57.8 million subscribers and 16.3 billion views as of November 2017.

Felix Kjellberg refers to his fans as the ‘Bro Army’, made up of his ‘Bros’, and he typically performs a ‘Brofist’ at the end of each of his videos.

On 20 October 2015, PewDiePie published his book “This Book Loves You”, a parody of self-help books in association with Penguin Group. The book includes a collection of aphorisms, jokes, and wisdom, paired with visuals.

Felix Kjellberg has two pet dogs, Edgar and Maya. Maya has only one eye.

He has raised money for various charity works with his fanbase of “Bro Army”. He raised more than $630,000 for the charity Save the Children in June 2014.

In February 2017, PewDiePie lost his YouTube Red show after it was revealed that several of his videos contained antisemitic references.

In June 2017, PewDiePie ranked #2 in “Top Influencers” list by Forbes in the Gaming category behind Markiplier.