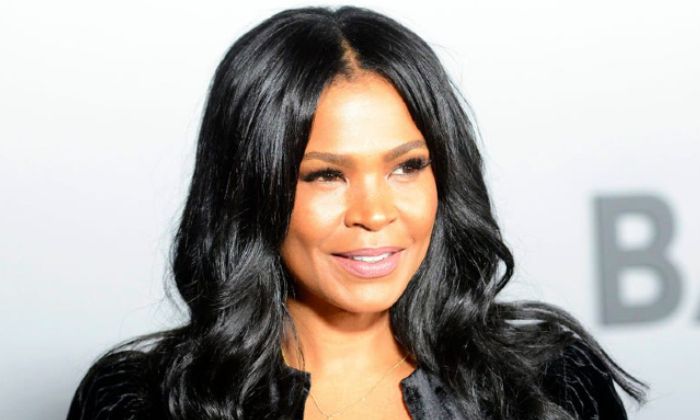 Who is Nia Long?

Nia Long is an award-winning actress from Brooklyn, New York, who reached prominence for her starring roles in television series such as The Fresh Prince of Bel-Air, Third Watch, and Empire. In her illustrious acting career spanning over three decades, the dusky beauty has appeared in various movies including Love Jones, Soul Food, In Too Deep, The Best Man, Big Momma’s House, Mooz-lum, The Best Man Holiday, The Single Moms Club and Fatal Affair.

Nia Long is the daughter of Talita (Gillman), a teacher and printmaker, and Doughtry Long, a high school teacher, and poet. She has one older half-sister named Sommore, who is also an actress and comedian. She is of Trinidadian, Grenadian, and Bajan descent.

Long’s parents divorced when she was just two years, and eventually, her mother took custody of her. She spent her childhood with her mother, living in Iowa City, Iowa until her age seven and later moved to South Los Angeles where they settled in.

She attended St. Mary’s Academy, a Roman Catholic school in Inglewood, California, and then went to Paseo Del Rey Elementary School in Playa Del Rey in California from Grade 3 to Grade 6. She obtained her undergraduate degree from Westchester High School in Los Angeles in 1989.

Nia Long has been in a relationship with American-Nigerian basketball player Ime Udoka since 2010. The couple welcomed their first child, a son, Kez Sunday Udoka on November 7, 2011, and followed by that, they got engaged in May 2015.

Prior to dating Ime, she had dated her fair share of men, including actors Chris Tucker, Will Smith, and Kevin Phillips, businessman Peter Thomas, and sportspersons Chris Webber and Dwight Freeney.

Yet of all her relationships, her relationship with actor Massai Dorsey deserves a special mention. Though they dated for only two years from 1999 to 2001, the relationship fizzled out. They have a son named Massai Zhivago Dorsey II, born on November 26, 2000.

Nia Long started her acting career back in 1986, guest-starring in an episode of the sitcom 227, which was aired on NBC. That same year, she appeared in the Disney television movie The B.R.A.T. Patrol starring Sean Astin, Tim Thomerson and Brian Keith.

From 1991 to 1993, she played Kathryn “Kat” Speakes in the soap opera Guiding Light before landing her first major role in the NBC sitcom The Fresh Prince of Bel-Air, playing Will Smith’s girlfriend and fiancée Beulah “Lisa”. Actually Jada Pinkett Smith was supposed to play that role, but she was too short to fit in that role which later went to Nia.

She made her film debut in Gerard Kikoine’s thriller Buried Alive in 1990, co-starring Donald Pleasence and John Carradine, which was his last film. Nia continued her success with roles in television series such as Judging Amy, Third Watch, Big Shots, The Cleveland Show, House of Lies Uncle Buck, Empire, and NCIS: Los Angeles.

On the film front, Nia had prominent roles in movies including Boyz n the Hood, Friday, Love Jones, Soul Food, In Too Deep, The Best Man, Big Momma’s House, Are We There Yet?, The Best Man Holiday and Fatal Affair.

Nia Long has accomplished a lot of things in her long and fruitful acting career. She is well-respected by her peers in the industry she enjoys. Her mesmerizing work has earned her three NAACP Image Awards and one Black Reel Award.

Just like her peers, Nia Long is very active on social media. She’s got over 3.5 million people following her on Instagram, which is her most popular social media account. She’s also on Twitter, where she has over one million followers.

Her name, Nia, comes from the fifth day of Kwanzaa and represents “life purpose.”

She appeared in the music video for the Kanye West song “Touch the Sky.”

Having been an actress since her late teenage years, Nia Long has not only achieved great success but also has witnessed ups and downs throughout her career. Her career accomplishments have made quite an impact on her net worth.

As of 2020, Nia Long has an estimated net worth of $13 million. Her success in Hollywood is nothing short of amazing and inspirational.