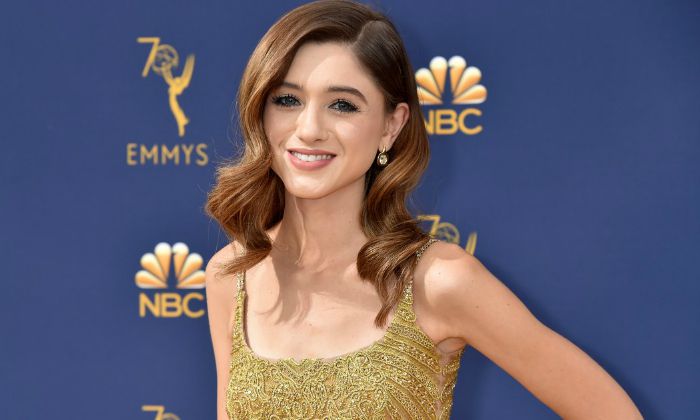 Who is Natalia Dyer?

Natalia Dyer is an American actress who grabbed spotlight with her role as Nancy Wheeler in the Netflix series Stranger Things. For her work in the series, she won the Screen Actors Guild Awards in the category “Outstanding Performance by an Ensemble in a Drama Series” in 2017. Besides her television career, she has appeared in over a dozen films including I Believe in Unicorns, Long Nights Short Mornings, After Darkness, and Yes, God, Yes.

Natalia Dyer was born on the 13th of January 1997, in Nashville, Tennessee, United States of America. She is currently 22 years old.

Unfortunately, not much information is available on her family background and education. It looks like that this stunning blonde is a private person and takes extra care not to reveal anything about her parents or siblings. It is clearly evident as we could barely find any information about her family.

Talking about her education, Natalia Dyer attended New York University, Nashville School of Performing Arts and and the Gallatin School of Individualized Study.

Natalia Dyer has been in a relationship with her Stranger Things co-star Charlie Heaton since 2017. They were spotted together at several red carpet events.

Natalia made her onscreen debut as a child actress with a pivotal role in a teen musical comedy-drama film Hannah Montana: The Movie in 2009. She played the role of Clarissa Granger in the film.

Natalia Dyer ventured into the small screen in 2016 when she was cast as Nancy Wheeler in the science fiction-horror Netflix series Stranger Things.

Dyer got her first major breakthrough in the industry for her performance in Netflix’ Stranger Things, for which she received critical acclaim and accolades. It was after her part in the show, she garnered huge popularity, and for her work in the series, she won the Outstanding Performance by an Ensemble in a Drama Series award at the 23rd Screen Actors Guild Awards event in 2017.

According to finance portals, Natalia Dyer’s net worth is at $2 million dollars.

She started her professional acting career at the age of 12 with the family comedic drama Hannah Montana: The Movie (2009) starring Miley Cyrus.

Not only onscreen, the stunning damsel is also popular on social media. She has already garnered a staggering count of 3.7 million followers on Instagram.

In 2019, Dyer played the character of Coco in the Netflix horror film Velvet Buzzsaw starring Jake Gyllenhaal, Rene Russo, Toni Collette, and many others.