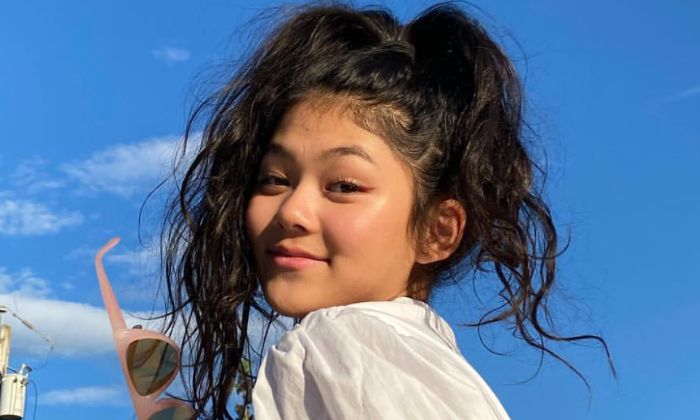 Who is Momona Tamada?

Momona Tamada is a Canadian actress and dancer of Japanese descent. Though she is only in her early teens, she has already garnered much attention for herself. The actress is certainly on the rise – having only begun her career back in 2019, she has already scored one of the lead roles in the Netflix’s The Baby-Sitters Club, based on the most popular children’s novel series of the same name by Ann M. Martin. She plays Claudia Kishi, the vice-president of The Baby-Sitters Club alongside Sophie Grace, Malia Baker, Alicia Silverstone, and Mark Feuerstein.

The Canadian cutie was cast in the younger version of Lana Condor’s character Lara Jean Covey on Netflix’s critically acclaimed hit franchise To All the Boys. His acting credits include The Main Event, The Terror, Gabby Duran & The Unsittables, and A Babysitter’s Guide to Monster Hunting.

Momona Tamada was born on the 28th of September 2006, in Vancouver, Canada.

The Netflix star hasn’t yet shared anything about her personal life, including her parents, siblings, and her childhood. It may be due to the fact that she is quite new to the industry and doesn’t want her family to be in the spotlight for privacy reasons. However, she has shared the pictures of her mom and dad on her Instagram as she celebrated father’s day and mother’s day with them.

It appears that she is the only child to her parents. What is known about her parents is that they are originally from Japan and they immigrated to Canada before she was born. She attended regular school until 7th grade and later switched to online school as she became busy with the shoot. She is currently doing her 9th grade.

Momona Tamada is single for sure as she is too young to get involved in a romantic relationship. She hasn’t talked much about the personal aspect of her life. Moreover, Momona is currently focusing on her career and education and has very little time for romance.

Momona Tamada has already made her mark in the industry, thanks to her charming personality and good looks. The young beautiful girl, who is just enjoying her adolescent years, has already got a pretty impressive resume.

Momona’s acting career began with the superhero web series, The Boys, in 2019, where she had a small part in one of the episodes. She starred alongside actors Karl Urban, Jack Quaid, Antony Starr, and Erin Moriarty. The series premiered on Amazon’s Prime Video on July 26, 2019.

After that, she played a minor role in AMC’s award-winning anthology series, The Terror, and had a lead role in Netflix’s family film, The Main Event.

got her big break, when she secured the role of the younger version of Laura Jean Covey, which was played by Lana Condor, on Netflix’s hit rom-com flick, To All The Boys I’ve Loved Before. The film, which premiered on February 12, 2020, had an ensemble stars, including Maddie Ziegler, Jordan Fisher, Ross Butler, and Madeleine Arthur.

Furthermore, she also reprised her role in the third installment of the trilogy film as well. Momona’s latest project is Netflix’s “The Baby-Sitters Club” which is based on the popular book series of the same name published from 1986 to 2000.

She stars as Claudia Kishi, the vice-president of The Baby-Sitters Club and an all-around fashion maven, alongside Sophie Grace, Momona Tamada, Shay Rudolph, Malia Baker, Alicia Silverstone, and Mark Feuerstein.

Momona is a competitive dancer and has been dancing since the age of four. She’s trained in ballet and tap. She has performed with the Royal Winnipeg Ballet as well as in the B.C. Summer Games Opening Ceremonies.

She appeared in the ivivva campaign for the athletic wear brand lululemon.

She is fluent in Japanese.

An interesting tidbit about her is that she loves baking and decorating cakes.

Her favorite colors are lavender and turquoise.

While the exact net worth of The Baby-Sitters Club star is not known, she should be minting a lot of money, given the fact, she has been a part of several high profile projects. It is known that she gained the most attention for starring in The Baby-Sitters Club but it is worth mentioning that she’s also a great dancer, having performed in several public events.

Despite having acted only in a few projects, Momona has already amassed quite a following on social media. She’s got over 16 thousand followers on her Instagram.