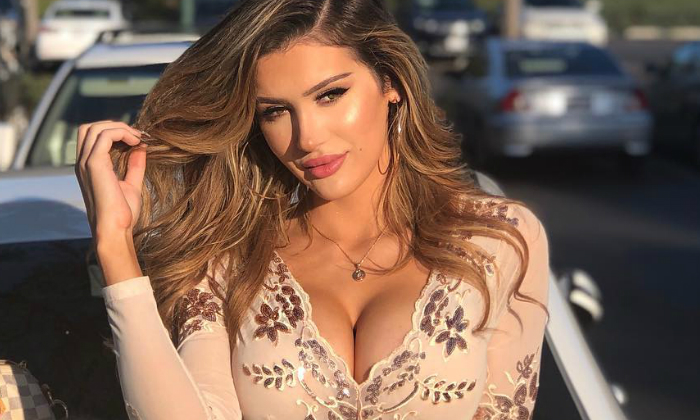 Molly Eskam is an American YouTube personality, model and social media influencer from Scottsbluff, Nebraska, who is probably known for her self-titled YouTube channel, which has earned over 580k subscribers. After gaining immense popularity as an internet celebrity, Molly ventured into modeling, a profession that she had always aspired of from her young age. At a young age, she found a lot of success, be it on social media platforms like Instagram and YouTune or in the modeling world. As an international lingerie model, Molly has made several catwalk appearances for renowned fashion brands and houses, including the Courtney Allegra Runway Show. Her amazing curves and irresistible facial features will surely leave you spellbound.

Molly Eskam was born on the 29th of September 1998, in Scottsbluff, Nebraska, United States of America. She is currently 21 years old.

Molly Eskam is the youngest and the only daughter of Laurie and Kent Eskam. She has two elder brothers – Chace Eskam and Chance Eskam. She grew up with her brothers in California where she developed a liking for modeling.

Regarding her love life, Molly Eskam has been in a longtime relationship with fellow YouTuber and social media personality Brian Awadis. However, he is largely known by his moniker FaZe Rug. He is also a professional gamer and has a gaming group called FaZe Clan.

In fact, Faze is a very popular YouTuber and posts content including prank videos and Call of Duty to his gaming channel, which has garnered over 11 million subscribers. You can see them featuring in each other’s YouTube videos. However, Molly nor Faze has explicitly revealed their relationship status but it is believed that the two are in a relationship.

Molly’s family moved to California from Scottsbluff while she was still a child. Growing up, she was exposed to social media and after realizing the potential of being a social media star, she decided to make a career out of it. The fame and the luxury life of other Youtube personalities draw in her attention and joined YouTube in May 2010.

However, she didn’t post any video on her channel until 2016 and literally, her social media career took off in the year 2016. She posted her first video titled “Q &A Plastic Surgery” on June 25, 2016, where she shared her experience with plastic surgery and answered a few questions related to it.

Molly covers a wide range of topics including travel, lifestyle, fashion, and comedy. She introduced her boyfriend FaZe Rug to her fans in January 2017 through a video and since then, they have collaborated together in many videos with each garnering millions of views.

Some of Molly’s popular videos on her channel are “How To Get Free Starbucks (Not clickbait)”, “Pool Day With My Dogs” and “Gold Digger Prank (Asking Faze Rug For 20K)”.

The dazzling lingerie beauty has today grown to be a prominent figure in the modeling industry and earns a handsome amount of moment form modeling gigs, sponsors and endorsement deals. Being a swimwear model, she mostly promotes swimwear and lingerie brands through social media posts and videos. Though her exact net worth is unknown at the moment, several media outlets estimate her net worth to fall around $500 thousand dollars.

Being a social media star, she has earned an impressive following on different social media pages and continues to strengthen her online presence. She has over 1.2 million followers on Instagram and more than 580k subscribers on her YouTube channel.

She spent her childhood in Carlsbad, California.

She was just 12 years old when she created her eponymous youtube channel. However, she started uploading videos only after 2016.

Molly has collaborated with fellow YouTubers like RiceGum, among many others.

She has walked the runway at various events including the Courtney Allegra Runway Show.

Molly has been accused of enhancing her body features through plastic surgeries but she has denied them all.