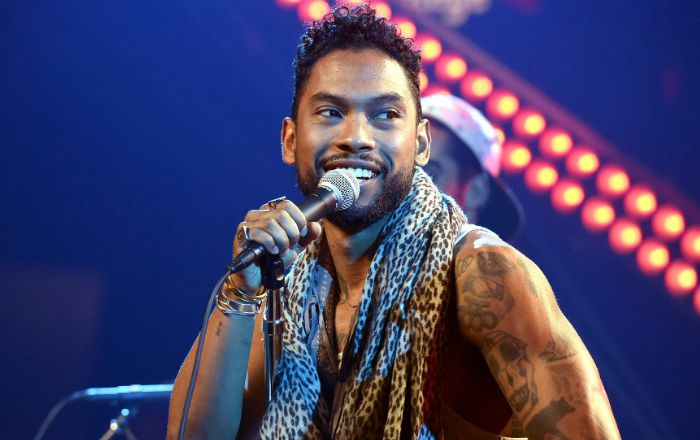 Miguel is an award-winning R&B singer and record producer who is known for his singles “Sure Thing”, “Quickie”, “How Many Drinks” and “All I Want Is You”.  His second album Kaleidoscope Dream debuted at no. 3 on the US Billboard 200 and its lead single “Adorn” earned him a Grammy Award in 2013. He released his third album, Wildheart in 2015, received critical acclaim, and was nominated for a Grammy in the category Best Urban Contemporary Album.

There’s not a lot to share regarding his parents and early life except that he is born to a Mexican American father and an African-American mother. Miguel grew up alongside his brother in San Pedro, California. He was just eight years old when his parents divorced. He grew up listening to music such as funk, hip hop, jazz and classic rock.

Miguel has been in a relationship with model Nazanin Mandi since 2005. The couple got engaged in January 2016 and married two years later on November 24, 2018, at Hummingbird Nest Ranch in Santa Susana, California.

In 2016, Miguel made his first onscreen appearance in the American crime drama film, live by night, which had Ben Affleck in the lead role.

He hasn’t appeared on TV series.

Miguel released his debut album titled All I Want Is You in November 2010 under Jive Records. The album performed poorly debuting at number 109 on Billboard 200. The album gardually gained traction to become a sleeper hit and sold more than 400,000 copies in the US. His second album Kaleidoscope Dream, was released on October 2, 2012, to critical acclaim. The album debuted at number three on the Billboard 200, selling 71,000 copies in its first week.

Miguel has released four studio albums till date. They are

Miguel’s net worth is estimated at $10 million dollars. That money comes from his album sales, world tours, endorsements, and social media activities.

Miguel was introduced to different forms of music such as R&B, funk, hip hop, jazz and classic rock by his parents. His parents divorced when he was eight years old.

He wanted to become a dancer at age 5 but started pursuing music when he was 13 and started writing songs at the age of 14.

He considers Phil Collins as one of his biggest influences.

He has won two BET Awards and one Grammy Awards.

In 2013 Miguel was nominated for a total of 5 Grammy Awards, of which, the single ‘Adorn,’ earned Miguel his first Grammy Award for Best R&B Song.