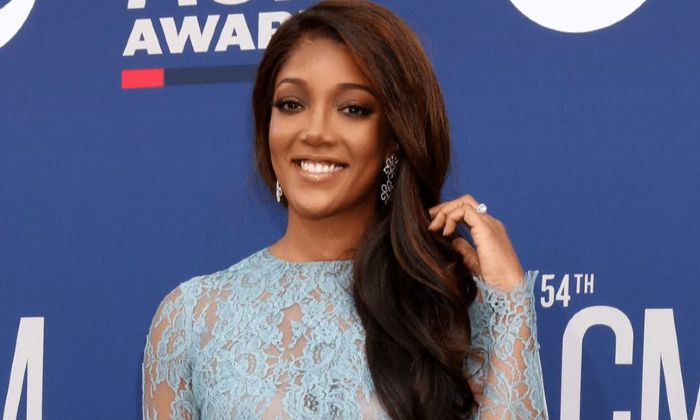 Who is Mickey Guyton?

A Texas native, Mickey Guyton, is best known as a country music singer and songwriter. She achieved global success with singles Better Than You Left Me and Black Like Me. The effervescent young singer had humble beginnings, starting her music career singing at church choirs to inking a record deal with Capitol Records Nashville to making her first major public appearance performing at the White House. Her accomplishments and her contributions to the music industry have not only earned the loyalty of fans but also the respect of the pop industry. Mickey has released three albums so far that includes Unbreakable (2014), Mickey Guyton (2015), and Bridges (2020). In 2020, she became the first black female artist to perform her own song at the ACM Awards.

Mickey Guyton is the daughter of African-American parents Phyllis Ann Roddy and Michael Eugene Guyton. She spent her early life moving around different places such as Waco, Tyler, Dallas, and Fort Worth as her father worked as an engineer.

She attended Santa Monica College. Other information about her family and education has not been revealed to the public yet except that she became interested in music at age eight when she saw LeAnn Rimes singing “The Star-Spangled Banner” at the Texas Rangers baseball game. She then took music classes to hone her skills.

Mickey Guyton married lawyer Grant Savoy in 2017. In August 2020, she revealed that she is expecting her first child with husband Grant.

Mickey Guyton grew up listening to the fusion of pop and country music, including country music artists LeAnn Rimes, John Denver, Dolly Parton, Whitney Houston and gospel stars BeBe and CeCe Winansbeen. She has been singing since she was five years old and started with singing gospel in church.

Capitol Nashville signed her in 2011 after watching her performance at a special concert at the White House. Three years later, she released her first extended n extended play, Unbreakable, on January 1, 2014, which charted at 15 on US Heatseekers.

In 2015, she dropped her single “Better Than You Left Me” and performed it at Nashville’s Grand Ole Opry. That same year, she released her eponymous EP Mickey Guyton, which peaked at 34 on Billboard’s Country Airplay. The songs were well received by people, earning her the music industry bible’s stamp as one of “10 Hot Country Artists to Watch in 2015.”

Mickey Guyton made headline in 2020 when she dropped the viral song “Black Like Me” as a part of the album Bridges. The song became an instant hit that eventually led her perform at the ACM awards, thus making her the first black woman to achieve the feat.

With no doubt, Mickey Guyton is a talented and passionate singer with lots of accomplishments to her name. She has accumulated a net worth of a whopping $1 million dollars, earned primarily from her singing career.