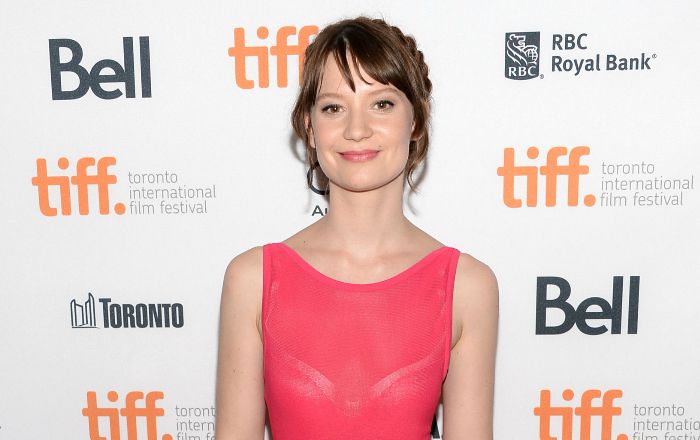 Mia Wasikowska is an Australian actress who won the Hollywood Awards Breakthrough Actress Award for her role in the comedy-drama film The Kids Are All Right. She played Sophie in HBO television series In Treatment. Her film credits include Alice Kingsleigh in Tim Burton’s Alice in Wonderland, Robyn Davidson in Tracks and Edith Cushing in Crimson Peak.

Her ancestry is British Isles and Polish.

Wasikowska was in a relationship with her The Double co-star Jesse Eisenberg from 2013 to 2015.

She was rumored to be dating her co-star of the film Damsel, Robert Pattinson in 2018. However, the two haven’t opened their mouth about their relationship status.

Mia Wasikowska made her onscreen debut in the 2006 drama-thriller film Suburban Mayhem. She was just 15 when she was offered a role of Lilya in the film.

She made her directorial debut in 2013 with the film The Turning, which was based on the novel of the same name by Australian author Tim Winton.

Mia landed the first television role of Lily Watson in an episode “Out on a Limb” of in the medical drama All Saints.

Her portrayal of the character named Sophie, a troubled teenager, in the HBO series “In Treatment” in 2008. She was just 17 when she was cast for the role.

She played Alice in Tim Burton’s “Alice in Wonderland” , a role that brought her worldwide fame and earned her a Teen Choice Award.

Mia has been affiliated with the brands Miu Miu and Prada Fragrance in the past.

Mia Wasikowska has a net worth of $8 million dollars. She resides in Bronte, New South Wales.

Mia lived in Poland for a year with her family. She was eight when her family moved to Poland as a part of her mother’s job.

She had originally desired to become a professional ballerina and took lessons with Jackie Hallahan at the Canberra Dance Development Centre. But, unfortunately, an injury on her heel prevented this from happening and she quit at fourteen.

Mia was exposed to European and Australian cinema at age 14. Although she has a shy nature, she felt acting in film was a way to explore human imperfections and was soon inspired to get into acting professionally.

She is good friends with Jamie Bell.

In 2008, Mia was named as one of Variety magazine’s Top Ten Actors to Watch.

She was included in the list of Time’s 100 Most Influential People in the World in 2011.

Photography is her passion and owns a Rolleiflex camera. One of her photos, featuring Cary Fukunaga and Jamie Bell, taken on the sets of the film Jane Eyre, was selected as a finalist at the 2011 National Photographic Portrait Prize which was hosted by Australia’s National Portrait Gallery on February 24, 2011.