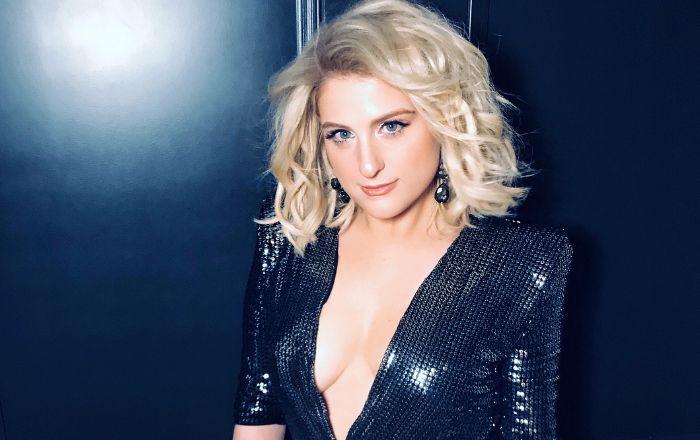 Who is Meghan Trainor?

Meghan Trainor is an American singer and songwriter who rose to fame with the release of her debut studio album, Title, in 2015, which debuted at number one on the US Billboard 200. The album spawned hit singles “All About That Bass”, “Lips Are Movin” and “Like I’m Gonna Lose You” and earned her a Grammy Award for Best New Artist. Trainor’s music has been noted for its retro style aesthetic. Common themes in her lyrics include subjects of modern womanhood, body image, and empowerment.

Meghan Trainor was born on the 22nd of December 1993, in Nantucket, Massachusetts, United States of America. She’s currently 26 years old.

Her ancestry is French-Canadian, Polish, and Irish with distant English and Guernsey roots.

Meghan attended Nauset Regional High School in nearby North Eastham. At high school, Meghan learned the guitar and was a substitute cheerleader and also went to Boston’s Berklee College of Music to attend their summer programs.

In 2009, Trainor released her eponymous debut album, Meghan Trainor, which received significant airplay from local radio stations. She also released another two independent albums and eventually the three albums were pulled from circulation after she signed a deal with Epic Records.

She released her debut single “All About That Bass” on June 30, 2014, through Epic, which topped the Billboard Hot 100 for eight non-consecutive weeks. The single went on to become one of the top-selling tracks in the international market and sold more than 11 million copies as well as charted number one in 58 countries.

Following the success of her debut single, Meghan Trainor released her debut EP, Title, on September 9, 2014, which peaked at number 15 on the Billboard 200. Her debut album, Title, was released on January 9, 2015, debuting at no.1 on the US Billboard 200 and different music charts in various countries.

Her second studio album, Thank You, was released on May 13, 2016. The album charted at no.3 on the US Billboard 200 and topped the various music charts in Australia, Canada, The United Kingdom, among others.

Meghan Trainor has not been cast in any film or TV show.

She earned worldwide fame and recognition through her singles “All About That Bass”, “Lips Are Movin”, “Like I’m Gonna Lose You”, “No” and “Me Too”.

Trainor’s net worth is estimated to be $8 million US dollars. She bought a luxury house in Toluca Lake on the outskirts of Los Angeles for a whopping $4.9 million. The house sits on an area of 7,000 square feet and boasts a swimming pool, a spa, and of course, a guest house.

She began singing at the age of six and by 11, she started writing songs.

Meghan was discovered by Big Yellow Dog Music at the Durango Songwriting Expo in Colorado at the age of 17 and signed her contract as soon as she turned 18.

She can play guitar, ukulele, piano, and trumpet.

Her music is mostly a mix of R&B and pop with hip hop and reggae elements. Her music is heavily influenced by 1950-60s music.

She cites Bruno Mars as one of her biggest influences.

She was named the “Breakthrough Artist of the Year” by the Music Business Association in 2014.