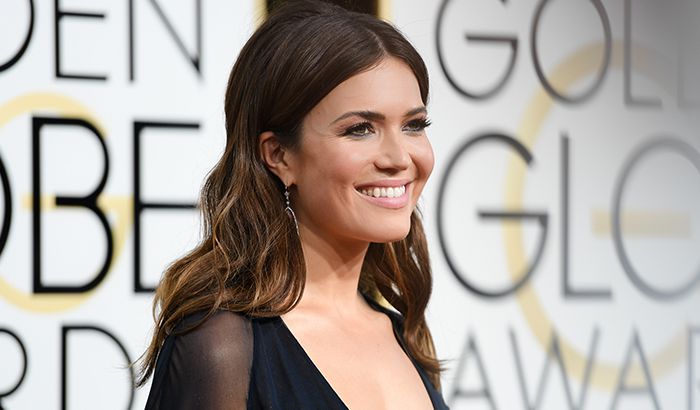 Who is Mandy Moore?

Mandy Moore is well-known American singer-songwriter and actress, who shot to fame with her singles, “Candy” and  “I Wanna Be with You”, both made it to US Billboard Hot 100. After attaining fame as a singer, this charming leggy lass forayed into acting and gained popularity after portraying Jamie Sullivan, in the romantic drama A Walk to Remember.

Many Moore was born on the 10th of April 1984, in Nashua, New Hampshire, United States of America. She is currently 35 years old.

Moore belongs to the white ethnic community. She has Irish and Cherokee ancestry on her father’s side, while she is of half-English and half-Jewish descent on her mother’s side.

As a student, Many Moore often switched between different schools in Florida until she dropped from her freshman year at the  Bishop Moore Catholic High School in Orlando to try her luck as a singer.

Before that, she attended Park Maitland School in Maitland, The Maile School in Winter Park and lastly went to the Lake Brantley High School in Florida.

Though, she opt out of regular studies, she continue her education through homeschooling and correspondence.

She started dating singer Ryan Adams in 2008 and eventually, they got engaged in February 2009 and married on 10th March 2009 in Savannah, Georgia. After living together for six years, Moore filed for divorce in January 2015 citing  “irreconcilable differences”.  Their divorce was finalized in June 2016.

Soon after filing divorce from her ex-husband Adams, Mandy began dating Dawes frontman, Taylor Goldsmith. On September 23, 2017, she officially confirmed and celebrated their engagement with a party thrown by her friend Raina Penchansky. The couple married on November 18, 2018, in Los Angeles, California.

Moore dropped her debut single, “Candy” on August 17, 1999, which was an instant hit. It debuted at number 88 on the Billboard Hot 100, before reaching a peak of number 41 on the chart.

She released her debut album, “So Real” on the 7th of December 1999, through Epic Records. The album peaked at no. 77 on the Billboard 200 and sold more than one million copies in the U.S. alone. Her second album, “I Wanna Be With You” was released on  May 9, 2000. The album was a commercial success, debuting and peaking at number 21 on the U.S. Billboard 200 chart. It went on to receive a Gold certification from the RIAA, for sales exceeding 500,000 copies in the U.S. alone

During the Summer of 2001, Moore made her feature film debut, where she voiced a Girl Bear Cub in the comedy Dr. Dolittle 2, starring Eddie Murphy. Later that year, Moore co-starred with Anne Hathaway in the comedy The Princess Diaries.

In 2000, Mandy appeared in the third episode of season 1 of TV series 2GE+HER: The Series as herself in the episode titled “Bunny”.

She was just 15 when she released her debut single and studio album. Thereafter, the unstoppable charming beauty has released numerous albums, featured in films and television series, and also voiced in films.

Her eponymous album, Mandy Moore was a huge commercial hit and her best album ever.The album was accredited gold in the U.S. and multi-platinum in the Philippines.

Moore won the Young Hollywood Award in the category Superstar of Tomorrow – Female for the film ‘A Walk to Remember’ in 2002.

In 2005, Many launched her own fashion line called Mblem,  a brand of contemporary knitwear and cashmere. But, it was shutdown in 2009.

Moore won the Grammy Award for Best Song Written for Visual Media for the song ‘I See The Light’ in 2011.

She received her star on the Hollywood Walk of Fame on March 25, 2019.