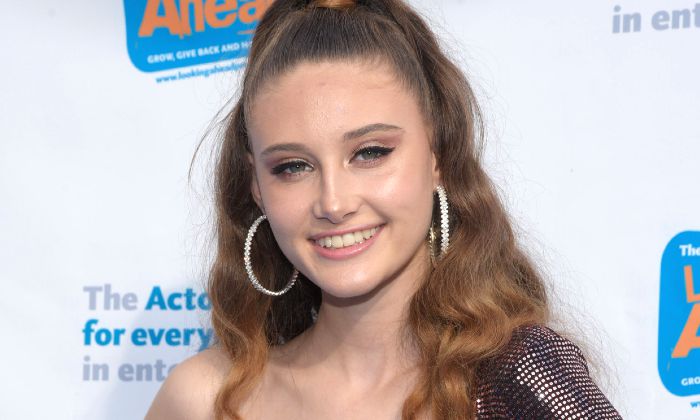 Who is Makayla Phillips?

Makayla Phillips is an American singer and actress who caught the spotlight after appearing on the 13th season of America’s Got Talent. This budding talent powerhouse earned a golden buzzer from Heidi Klum for singing “Warrior” by Demi Lovato before she was eliminated in the semifinals. She honed her vocal skills and returned to the 18th season of American Idol in 2020 and made it to the top 11 before she was shown the door.

Makayla Phillips was born on the 8th of July 2002, in Temecula, California, United States of America. She is currently 18 years old.

Makayla Phillips was born the middle of three children to American parents, Regina Phillips, a teacher and talent manager at Dream Talent Managements, and Todd Phillips, a firefighter. She has an older sister named Whitney McDonald and a younger brother named Aldan Phillips.

Her great-grandpa had a top 100 Billboard album in 1954. As far as her education is concerned, Makayla is one such cutie who cemented her stardom at a very young age that led her to enroll in homeschooling.

Now, this is the topic that most of you are probably looking forward to. Well, we are sorry to say that there is not a lot we have to share regarding the personal matters of Makayla. She has tried to keep things away from the media to the best of her abilities. Moreover, Makayla Phillipsis currently focusing on her career and education and has very little time for romance.

Makayla Phillips competed in the 13th season of the American reality show, America’s Got Talent, when she was just 15 years old. She impressed one of the judges, Heidi Klum, during her audition with her beautiful rendition of “Warrior” by Demi Lovato, earning her a Golden Buzzer that got her a ticket straight to the Quarterfinals. In the Quarterfinals, she vowed the audiences and judges, singing “Issues” by Julia Michaels and advanced to the semifinals.

She sang “Who U Are” by Jessie J in the semifinals. Despite her performance winning a standing ovation from judges Mel B and Heidi Klum, she didn’t get enough public votes to make it to the finals and was eliminated from the singing show.

Makayla Phillips is one such talent who is desperate to achieve her dream and is willing to go the extra mile to accomplish it. She is a perfect example of what one can do if they set their sights on a goal and refuse to give up. The young beauty has already garnered much attention with her previous appearance on GOT. With a lot of hope and desperate to win the reality show, she appeared on the 18th season of American Idol.

She sang “Who’s Lovin’ You” by The Miracles for her audition. Her impressive vocals and confident stage presence checked all the boxes that are required to further the competition. She advanced further to the Hollywood Duet and Solo rounds to Hawaii to Top and then to the Top 11. She was saved by judges and sang the beautiful rendition of Miranda Lambert’s “The House That Built Me”.

Though her performance received praise from all the judges, she didn’t receive votes to move on to the next level. She was eliminated from the show on May 5, 2020.

She has a YouTube channel that is being subscribed to by nearly 50 thousand people. She uploads covers of popular artists from Christina Aguilera to Alicia Keys to Beyonce apart from her other performances.

She has been singing since she was two years old.

In 2017, Makayla was nominated for the Temecula Valley Music Awards in the Youth Original category.

She is good friends with GOT Season 14 winner Kodi Lee.

She signed with Dream Talent Management in 2013.

Makayla won a scholarship at the renowned Hollywood Launch program in Granada Hills which helped her to boost her career.

Apart from singing, Makayla is also a passionate actor. She has appeared in stage plays like Aladdin, as Jasmine, Wizard of Oz as the Witch, Bottle of Joy, Alice in Wonderland.

In addition, she has guest-starred in episodes of The Birthday Boys and My Crazy Ex, and a historical horror short called Occam’s Razor.

She cites singers Ariana Grande, Demi Lovato, and Whitney Houston as some of her biggest musical inspirations.

She already auditioned for The Voice and American Idol when she was fifteen before getting her hands on GOT but she was turned down as she was too young at that time.