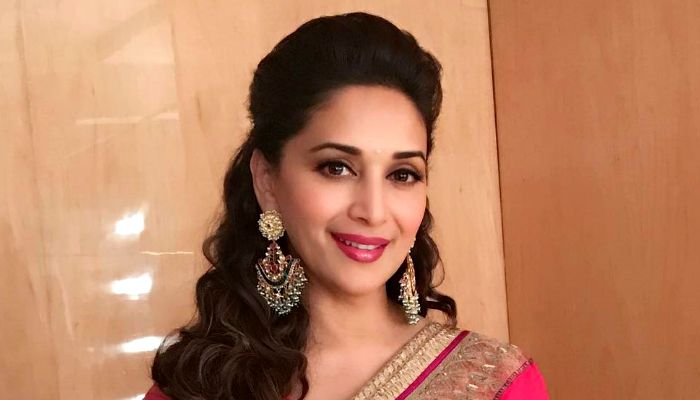 Who is Madhuri Dixit?

Madhuri Dixit is a famous Bollywood actress, best known for her amazing works in Hindi films. She has stunned the audience with her sizzling moves, and apparently, a great dancer. Madhuri conquered the hearts of millions of fans in the late 80s and 90s with her mind-blogging acting skills and still remains a dream woman of several men. Check out her biography to learn about her childhood, career, height, weight, vital stats, lifestyle, husband, children, cars, house, net worth, and her less known facts.

Madhuri was born on the 15th of May 1967, in Mumbai, Maharashtra, India into a Chitpavan Brahmin family. She is currently 52 years old.

She attended Divine Child High School in Mumbai. She received her degree in Micro-Biology from Parle College in Mumbai.

Madhuri Dixit married Shriram Madhav Nene, a cardiovascular surgeon from Los Angeles, on 17 October 1999. The couple together has two sons, Arin (b. March 2003) and Rayaan (b. March 2005).

Anil Kapoor – She briefly dated Bollywood actor Anil Kapoor in the past.

Sanjay Dutt – Madhuri Dixit and Snajay Dutt began dating while filming for Saajan in 1990. Despite her parents objections, she continued to be in relationship with him until he was arrested in charges with TADA in 1993. Dutt was already married to Richa Sharma, however, they both were in relationship.

In 1984, She made her acting debut with Bollywood film, Abodh alongsode Bengali actor, Tapas Paul.

She experienced difficult during her initial days of carer, as she faced a string of failures at box office. Her breakthrough role of Mohini in N. Chandra’s 1988 romantic thriller Tezaab opposite Anil Kapoor was her first hit. It went on to become the highest grosser for that year.

She made her television debut in 1985 with the reality TV show, Paying Guest. She appeared on the first episode of the show.

In 2001, she made her debut as a host on Sony Entertainment’s show Kahina Kahi Koi Hai,  a match making show. She also appeared as judge on the dance reality shows, Jhalak Dikhhla Jaa and So You Think You Can Dance (India).

Dixit has endorsed several brands and products like Olay, Oral B, Maggie, Dabur Chyawanprash, Eureka Forbes, Intex Technology, to name a few. She came into fire when Food Safety and Standards Authority of India (FSSAI) banned all nine variants of Maggi instant noodles from India, terming them “unsafe and hazardous” for human consumption, which were endorsed by the actress.

Dixit has an estimated net worth of $35 million. She takes Rs 4- 5 crores per film and Rs 25 crore for one season of the reality dance show, ‘Jhalak Dikhhla Jaa’. She also earns tons of millions form brand endorsements, television appearances, event appearances and films. She is one of the richest actresses of Bollywood. Eureka Forbes roped in Madhuri Dixit Nene and Dr. Shriram Nene for 5 years as goodwill ambassadors of its water purifier brand Aquaguard for Rs.100 Crore.

Madhuri has several proprieties in possession with her in Mumbai and the US. She lives with her family in a luxury apartment in the posh area of Mumbai. She has an impressive collection of exotic cars featuring Audi, Rolls Royce and Skoda Rapid.

Madhuri intended to become a dancer and therefore started learning dance from age three. She is also an accomplished Kathak dancer and has received many awards for the same.

Before entering into mainstream cinema, she conquered the modeling world. It took eight years for her to deliver a commercial box office success.

She would have been a microbiologist if were not an actress.

She is referred to as the “Dhak Dhak Girl”, she is famous for her dance in the song “Dhak Dhak Karne Laga” from the film Beta.

Dixit was the first Bollywood actress to get remuneration in crores. She was paid double the salary of Salman Khan for the film Hum Aapke Hain Koun (1994).

Madhuri Dixit had a celebrity crush on cricketer Sunil Gavaskar.

In 2001, she won INR 5,000,000 on the TV show Kaun Banega Crorepati and donated this amount for the welfare of victims of earthquake in Gujarat and to an orphanage in Pune.

She is the only actress in Bollywood who have been nominated 14 times for Filmfare Award for Best Actress and won 4 awards in the Best Actress category and 1 in the Best Supporting Actress Category.

In 2014 Madhuri was appointed the UNICEF Goodwill Ambassador in India.

In 2013, she launched an online dance academy called Dance With Madhuri. She even today practises Kathak thrice in a week.

In 2018, Forbes India included her in their annual “Celebrity 100” list that ranks India’s celebrities based on popularity and income.