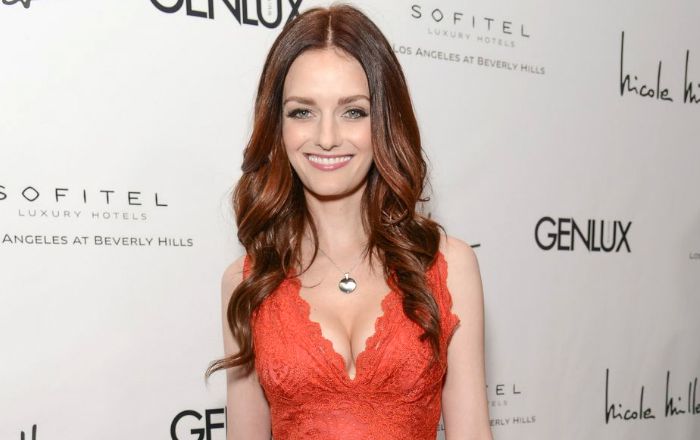 Who is Lydia Hearst?

Lydia Hearst is an American fashion model, actress, and lifestyle blogger. She is the Heiress to the publishing tycoon William Randolph Hearst. She is best known for her ad campaigns for Prada, Louis Vuitton DKNY, MYLA Lingerie, and H&M. She runs her own lifestyle blog for which she writes fashion and lifestyle-related content. She has modeled for leading fashion brands such as Chanel, Fendi, Rebecca Taylor,  Twinkle, and Three As Four.

Lydia Hearst was born on the 19th of September 1984 in Wilton, Connecticut, United States of America. She is currently 35 years old.

She was born to Bernard Shaw and Patricia Hearst. She has an older sister named Gillian Hearst-Shaw. She is a great-granddaughter of the newspaper publisher and politician William Randolph Hearst. Her maternal grandparents are Randolph Apperson Hearst and Catherine Wood Campbell.

Lydia Hearst is married to Chris Hardwick since August 20, 2016. They got married in Pasadena, California.

Before marrying Chris, she has had dated many men throughout her life. She briefly dated Oliver Hammond in 2003 before getting involved in a relationship with actor Justin Bartha in 2006, They dated for over a year, ending their relationship in 2007. During this time, many tabloids reported that Justin publicly yelled at her and that might be the reason for their split.

In 2010, Lydia was seen going out with actor Jeff Goldblum, and shortly after, they both confirmed their relationship to the media. These two broke out in 2011. In 2012, she was reported to be dating actor and producer Benedict Cumberbatch in 2012.

Lydia Hearst made her acting debut as Stella in the film ” The Last International Playboy” in 2009. She has since appeared in a number of short films, including credits on Fame Fatale, Consumed, Velvet Morning, and Desire.

In 2004, Lydia appeared in an episode of the TV show E! True Hollywood Story. She was cast as Charlotte Roberts in the supernatural horror drama TV series “South of Hell’ in 2015.

Being known as the great-granddaughter of the newspaper publisher and politician William Randolph Hearst.

Known for her ad campaigns and modeling gigs with Prada, Louis Vuitton, Alexander McQueen, Bottega Veneta, Sephora, among others.

Lydia Hearst has an estimated net worth of $100 million.

She began her modeling career at a very young age after she was discovered by photographer Steven Meisel. Her first modeling gig was as the cover model for Vogue Italia in 2004.

Lydia won the ‘Model of the Year’ award at the Michael Awards and “Best International Supermodel” at the Madrid Glamour Awards in 2008.

Lydia has walked the runway for international brands such as Chanel, Fendi, Rebecca Taylor, Catherine Malandrino, Twinkle, Nicole Miller, Three As Four, Jeremy Scott and many others.

In the year 2012, Lydia was named the Smile Ambassador for Operation Smile and won a Catwalk For Charity Humanitarian Award in 2014.

Hearst was a supermodel coach alongside Anne Vyalitsyna and Naomi Campbell for the second edition of Oxygen’s The Face modeling reality competition.

She appeared in music videos for Miles Fischer, Cisco Adler, and Johnny Polygon.

Hearst briefly worked as a columnist for the short-lived Page Six magazine and has since written for her own lifestyle/fashion blog.