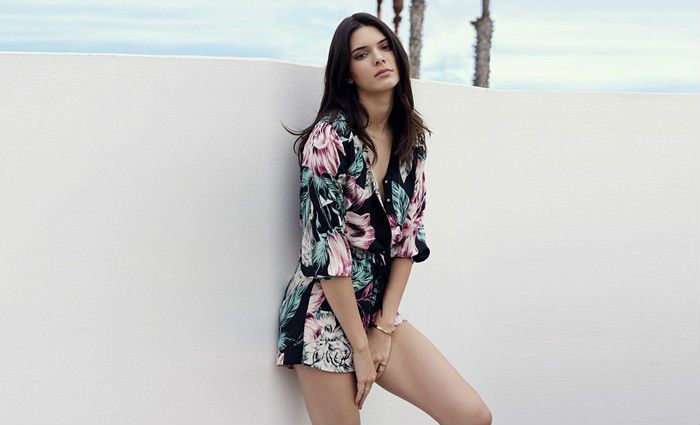 Who is Kendall Jenner?

Kendall Jenner is an American television personality, socialite and fashion model, who doesn’t need an introduction. The world-famous Jenner-Kardashian clan achieved fame and popularity with the reality television show, ‘Keeping Up With The Kardashians’ alongside her famous half-sisters Kim, Khloe, and Kourtney Kardashian and her younger sister Kylie Jenner among others. However, the beautiful young talented lady wanted to make a name herself in the entertainment industry and came into limelight when she forayed into the glamour world. The rise of the icon in the fashion world is an inspiration to many young aspiring models.

At the age of 14, Jenner came into modeling, and today, the 24-year old beauty bombshell is one of the young wealthiest person on the planet and the highest-paid model in the fashion industry. As a model, Kendall has featured on the covers of a dozen of popular fashion magazines and walked the runway for several fashion designers and fashion shows like Paris Fashion Week, Milan Fashion Week, and New York Fashion Week. She is the face for brands like Forever 21 and Sherri Hill and walked the ramp for them. She has also hosted many red carpet events like Glee 3D Concert Movie and Breaking Dawn Part 1, eventually becoming the most wanted fashion icon in business.

Kendall Jenner was born on the 3rd of November 1995, in Los Angeles, California, United States of America. She is currently 24 years old.

Kendall Jenner is the daughter of Caitlyn Jenner, a former Olympic decathlete champion, and Kris Jenner, who is a television personality. She has a younger sister named Kylie Jenner and eight half-siblings from her parents’ previous relationships.

She had a brief education while she attended Sierra Canyon School and Yorkshire High School. She stopped studying to pursue her modeling career.

Julian Swirsky (2011) – Kendall dated Justin Bieber’s friend Julian Swirsky for some time in 2011. Beiber arranged a date for his friend with Jenner but that didn’t last long.

Ashton Irwin (2014) – After her breakup with Styles, Kendall was rumored to be dating Australian drummer Ashton Irwin in 2014.

Lewis Hamilton (2015) – It was rumored that Formula One racer Lewis Hamilton and Kendall Jenner had a fling in 2015 after they met in a racing tournament.

Jordan Clarkson (2016) – Kendall and American basketball player Jordan Clarkson were spotted on a lunch date in 2016 and subsequently, they were in a relationship for some time.

Travis Scott (2016) – The couple were romantically linked as they were spotted together on multiple occasions.

Ben Simmons (2018-Present) – From 2018, Kendall has been in a relationship with an Australian professional basketball player, Ben Simmons.

She had never appeared in films yet.

She made her first appearance on television with the family reality show Keeping Up with the Kardashians in 2007 that airs on the ‘E!’ cable network.

Kendall has been associated with brands like Agua Bendita, Forever 21 and Sherri Hill amongst others.

She is the Brand Ambassador for Seventeen Magazine and Adidas.

At a young age, Kendall has amassed massive popularity and success through modeling and various business ventures. Her net worth is estimated to be $40 million. She made a whopping $17 million in 2016 from on and off the runway modeling.

Jenner bought a $1.4 million condo in Los Angeles in 2014 and bought a six-bedroom, four-and-a-half-bathroom mansion in Hollywood, California for $6.5 million in 2016.

Kendall was spotted driving around in a Range Rover. She also owns a $100,000 Chevrolet Corvette which she purchased in 2015 on her 20th birthday.

She had been also a cheerleader in her high school.

Kendall and her sister Kylie launched their own clothing line called Kendall and Kylie which is distributed by PacSun.

She makes a lucrative amount of money from endorsements deals with companies like Calvin Klein, Estee Lauder, Marc Jacobs, Fendi, Kar Lagerfeld, and many others.

She is often regarded as ‘Instagirl’ as she is one among the top 15 most followed celebrities on Instagram.

The damsel is the tallest among Kardashian sisters. Kendall has a tattoo on her inner lip which reads “MEOW”.

Kendall and her sister Kylie were named as Time’s “30 Most Influential Teens” in 2014 and 2015. respectively.

Forbes named Jenner as the No.1 highest-paid model in the world in 2017 as well as in 2018, respectively.

She is close friends with English model, Cara Delevingne.

She is also a friend of actor Taylor Lautner.