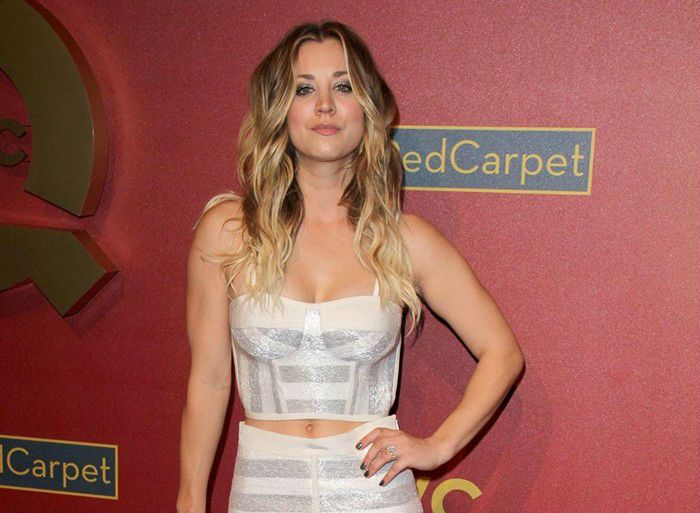 Kaley Cuoco is an American model and actress, well-known for playing Penny in the critical acclaimed American sitcom, The Big Bang Theory. She took up acting career in the early age, and her breakthrough role in Television industry came in the form of her role as  Bridget Hennessy on the ABC sitcom 8 Simple Rules. Thereafter, she landed many successful roles like Billie Jenkins on the television series Charmed and also appeared on hit movies like ‘Picture Perfect’, ‘Alley Cats Strike’, ‘Crimes of Fashion’, ‘The Hollow’, ‘To Be Fat like Me’, ‘The Last Ride, ‘The Wedding Ringer’ and ‘Burning Bodhi’ to name a few.

Since she started acting at the early age, she was home schooled and never went to regular school.

Kaley Cuoco married equestrian Karl Cook on June 30, 2018. He is the son of billionaire Scott Cook. These two started dating in March 2016, and got engaged on November 30, 2017.

Thad Luckinbill (2002) – Kaley dated American actor Thad Luckinbill, well known for portraying the character of J.T. Hellstrom on the CBS soap opera The Young and the Restless, in 2002.

Kevin Zegers (2003-2004) – The charming actress was once romantically linked with the Canadian actor Kevin Zegers from 2003 to 2004. The duo together worked in the 2004 film, Josh Henderson.

Al Santos (2007) – Kaley dated American model and actor AL Santos in 2007 but their relationship was short lived. They met in the sets of Killer movie and has been romantically attached thereafter.

Johnny Galecki (2008-2010) – Cuoco began dating her co-star, Johnny Galecki who is best known for playing “Leonard Hofstadter” in the hit CBS sitcom “The Big Bang Theory”, in 2008. Their private relationship lasted for two years and eventually ended in 2010.

Bret Bollinger (2012-2013) – The duo began dating in March 2012 but ended their relationship in 2013. During the course of the year, they were spotted at several places sharing kisses and hugging each other.

Kaley’s first film appearance came in 1992 with the thriller film ‘Quicksand: No Escape’, which was a television film. Thereafter, she has appeared in many films and some of her notable films include, To Be Fat like Me (2007), Hop (2011) and Authors Anonymous (2014).

She made her debut in television in the American sitcom, My So-Called Life, aired on ABC between 1994 to 1995.

She is best known for playing Penny on the CBS sitcom The Big Bang Theory, for which she has received Satellite, Critics’ Choice, and People’s Choice Awards.

Cuoco has been associated with a number of brand and products, including ProActiv, Priceline, Wish Granted, Son Safer, Baby Talking for Toyota Rav4, Spare Tire, Infinite Witches among others.

Having a lucrative acting career, Cuoco has an estimated net worth of $45 million. This natural blonde makes money from acting in movies and television series, brand endorsements, business deals and personal investments. Her net worth saw a staggering growth since 2007 following her appearance in the television series The Big Bang Theory. She is paid $1 million for every episode and it is likely to increase for the next season.

She once said in an interview that she is not a car fan, however, she is seen driving around in a Mercedes Benz SLS convertible, Range Rover and  Toyota RAV4. She also owns a Lexus RX350 and a BMW.

She purchased a beautiful and elegant mansion in Sherman Oaks, San Fernando Valley area in California in 2010 for $2 million. This 5,233 sq-feet two-storey house comprises 5 bedrooms and 5 bathrooms with a side-facing car garage,a spa and a swimming pool at the backyard. The house is exquisitely designed and engrossed with marbles and hardwood. She shares neighborhood with a number of celebrities and businesspersons like Kelly Stone, Paula Abdul and Jennifer Garner, to name a few.

“I love animals, and I feel more of a connection to animals than people.”

“I love the fashion world. I love clothes. I love style.”

“I’m hoping one day to open my own shelter. I would be the person with the three-legged dog. I just love animals more than people; I really do.”

“For me, what I really want to come out of it is to show people that I can hold together a movie, be the number one character and play someone who is twenty or twenty-one.”

“I start the day with oatmeal with vanilla almond milk. If I don’t, I’m dying by noon and eating everything in sight. On-set, I avoid crap and pack soup and salad. I cook pork chops or turkey tacos for dinner.”

She is even more popular on Instagram with a whopping 3.3 million followers.

“Cuoco” is an Italian word, which means “cook” in English.

She was an amateur tennis player, who stared playing tennis at the age of three. She left the sport to concentrate on acting.

Kaley Cuoco has received 30 award nominations and has won 8 awards. In 2003, she received a ‘Teen Choice Award’ for her performance in ‘8 Simple Rules’.

For her role in ‘The Big Bang Theory’, she has received one ‘Critics’ Choice TV Award’, two ‘People’s Choice Awards’ and one ‘Satellite Award’.

Besides acting, she loves horse riding. She has a horse named Bojangels along with two pet dogs – Duke (German Shepherd) and Petey (Chihuahua-dachshund mix dog).

Kaley has undergone nose job and Breast augmentation at the age of eighteen.

She did six Barbie commercials as a child.

She has a tattoo on her lower back, which is a symbol for faith.

Alongside fame, wealth and stardom status, Kaley Cuoco also featured in a number of television commercials and has lent her voice for several characters in animated television series and movies.

She received a star on the Hollywood Walk of Fame in 2014.

Kaley Cuoco has been named into the top 20 on Maxim magazine’s ‘Hot 100 Women’ list twice.

Cuoco launched Yes, Norman Productions, a film and television production company in October 2017. The company has bought rights to The Flight Attendant, a book written by author Chris Bohjalian. It will be made into a series in collaboration with  Warner Bros. Television with Cuoco to star and executive produce.