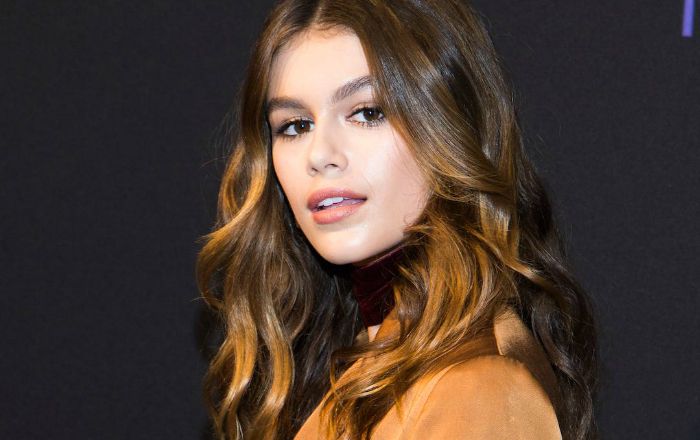 Who is Kaia Gerber?

Kaia Gerber is an internationally acclaimed American model and actress who came into the modeling scene when she was 10 years old. Having modeled for high profile brands like Versace, Vogue and Pop Magazine, Kaia has managed to achieve a huge feat at a very young age.

Gerber is the daughter of model-turned-businessman Rande Gerber and the supermodel, Cindy Crawford. She has an older brother, Presley Gerber, who is also a model. Her father is Jewish, while her mother has German, English, French, and Danish ancestry.

Kaia Gerber has been dating fellow model Jordan Barrett since early 2017. They were spotted together having fun on several occasions.

Being a daughter of renowned model Cindy Crawford, it’s no wonder that this fascinating beauty has got everything required for a perfect model. Kaia started her modeling career at the age of 10 and the credit goes to the luxury fashion brand Versace for launching her into modeling. By 13, she was featured in Teen Vogue and has since modeled for several brands such as modeled for magazines such as Vogue, and Pop Magazine and walked for fashion houses such as Marc Jacobs, Burberry, Alexander Wang, Coach, Prada, Chanel, Fendi, Moschino, and Versace.

In 2016, she landed her first role in TV drama movie Sister Cities, starring as 13-year-old Carolina.

In August 2015, she guest appeared in the TV show Entertainment Tonight as herself. She has also appeared on Access Hollywood in 2016.

Kaia is affiliated with a number of brands including Miu Miu Eyewear, Alexander Wang, Marc Jacobs, Chrome Hearts and many others.

As of 2020, Kaia Gerber has accumulated a net worth of $3 million dollars.

She has got a lot of resemblances to her mother Cindy which helped her to gain massive attention on the international arena.

She started modeling at the age of 10 when she modeled for fashion brand Versace’s kids line ‘Young Versace’.

At the age of 13, she signed with IMG Model, a leading player in modeling scene, and landed her first modeling gig with Teen Vogue.

Kaia made her runway debut in 2017 when she walked for Raf Simons’ Calvin Klein Collection.

She landed her first Vogue cover in February 2018 issue of Vogue Paris.

She’s proficient in French and English.

When Kaia appeared on the cover of Pop Magazine, its editor praised her most beautiful girl in the world.

Karlie Kloss is her fashion icon.