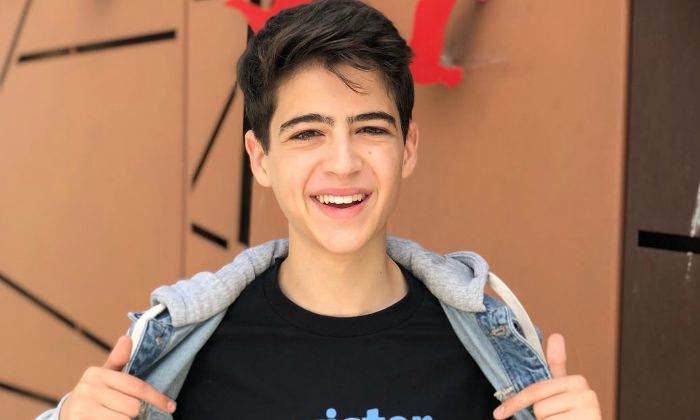 Who is Joshua Rush?

Joshua Rush is an American actor who started out as a child actor with supporting roles in movies like ‘Parental Guidance’ and ‘Saving Lincoln’ and television series such as ‘Heroes’ and ‘Chuck’. Rush’s biggest role to date came when he landed the role of Cyrus Goodman in Disney Channel’s most popular family drama series ‘Andi Mack’. His natural acting abilities and debonair looks led to many more acting roles along the way. He had recurring voice roles as Breehn and Jeremy Birnbaum in television series, ‘Clarence’ and ‘Star vs. the Forces of Evil’, respectively. Since 2016, he has been voicing the character Bunga on the Disney Junior television series ‘The Lion Guard’.

Joshua Rush was born on the 14th of December 2001, in Houston, Texas, United States of America. He is currently 17 years old.

Joshua Rush is the only child to his parents, Adam Nisenson, a marketing strategist and Beryt, a corporate documentary producer. His parents are both Jewish, and his maternal grandfather is from Israel, living in Ramat Gan. Joshua had his Bar Mitzvah ceremony in Israel.

Information regarding his education is unknown. However, there are reports that he has been homeschooled.

He is openly bisexual which he revealed to his fans on Twitter and Instagram on August 6, 2019. He appears to be currently single as he dated anyone publicly.

Furthermore, he has perpetually managed to keep his personal life away from the spotlight and it looks like that nothing has attracted him more than acting.

Joshua Rush made his big-screen debut in Andy Fickman’s family comedy film, ‘Parental Guidance’ in 2012. He played the role of Turner Simmons alongside an ensemble cast including Billy Crystal, Bette Midler, Marisa Tomei, and Tom Everett Scott. He won a Young Artist Award nomination as Best Supporting Young Actor Age Ten and Under in a Feature Film.

He landed his first acting gig in 2009, portraying the character of Will in an episode of the ABC medical drama series, ‘Private Practice’.

Joshua received critical acclaim for his role as Cyrus Goodman, one of the first two main characters and the first gay main character on Disney Channel, series ‘Andi Mack’. He is the best friend of Andi (played by Peyton Elizabeth Lee), the series main character as well as the male love interest of TJ Kippen (played by Luke Mullen). He played the role for three seasons of the series from 2017 to 2019.

Joshua is also known for his voice roles and has done voice gigs as Toby in ‘The Adventures of Puss in Boots’, Breehn on Cartoon Network’s ‘Clarence’ and Bunga on the Disney Junior series ‘The Lion Guard’.

He started working in the creative industry at just 10 months old when he first appeared in a local television special. He has also appeared in a number of commercials, print ads, and catalogs before he turned three.

He is an avid dog lover.

Joshua’s bilingual and speaks fluently in English and Spanish. He learned Spanish from his nanny.

His parents are largely supportive of his acting career from the very beginning of his career.

He has served as the Under 18 Ambassador for National Absentee Ballot Day.

In 2018, he launched a weekly news series on Instagram where he covers politics and current affairs. He’s doing this with an intent to deliver the news to the younger audience.