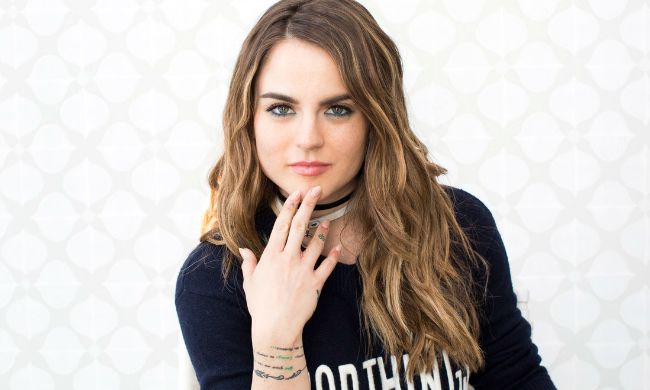 Joanna Noelle Blagden Levesque, better known by her stage name, JoJo, is an American vocalist, songwriter, and actress. She rose to fame after participating in the television show America’s Most Talented Kids in 2003 and gained immense popularity as she was only thirteen. With the release of her self-titled debut album in June 2004, she became the youngest artist ever to top the US Billboard Pop Songs chart. Over the years, JoJo has dropped a number of albums, singles, EPs as well as starred in films and TV series. She’s dominating the music charts for over a decade, thanks to her soulful voice, vast vocal range and of course unmatched beauty.

JoJo was born on the 20th of December 1990, in Brattleboro, Vermont, United States of America. She is currently 29 years old.

JoJo is the daughter of Joel Maurice Levesque and Diana Levesque (née Blagden). Her mother sang in a Catholic church choir and was trained in musical theater. She was raised by her mother after her parents divorced when she was four years old.

JoJo has English, Native American, French, Polish, Irish, and Scottish ancestry. She graduated from high school in 2009. She was accepted to Northeastern University where she considered majoring in cultural anthropology but did not attend.

JoJo dated American soccer player Freddy Adu from May 2005 until September 2006. And, then, in 2008, she began dating Jeremiah McConico but their relationship also didn’t last long.

JoJo released her first studio album titled JoJo on June 22, 2004, under Blackground and Universal Records. The album peaked at #4 on the Billboard 200 with the lead single “Leave (Get Out)” peaked at #12 on the US Billboard Hot 100. So far, she has released three studio albums, two mixtapes, three extended play (EP), seven singles, and 13 promotional singles and has sold over 7 million albums worldwide. Her album credits include –

She debuted with 2002 drama movie Developing Sheldon for her role as Young Elizabeth.

In 1998, JoJo appeared as a contestant in season 1 of the comedy series Kids Say the Darndest Things.

She has an estimated net worth of $7 million US dollars as of 2019. She lives in Los Angeles and owns a BMW.

She was born in a family that was not financially rich where she grew up in a one-bedroom apartment in Foxborough.

Her parents divorced when she was four years old. She started singing along with her mother who sang in a Catholic church choir and was trained in musical theater.

As a child, she had participated in various singing competitions and gained fame after competing on the television show America’s Most Talented Kids in 2003.

She was offered a record deal at the age of 6, but her mother turned it down because she believed JoJo was too young for a music career.

She supports many charities such as She’s the First, World Vision, etc.