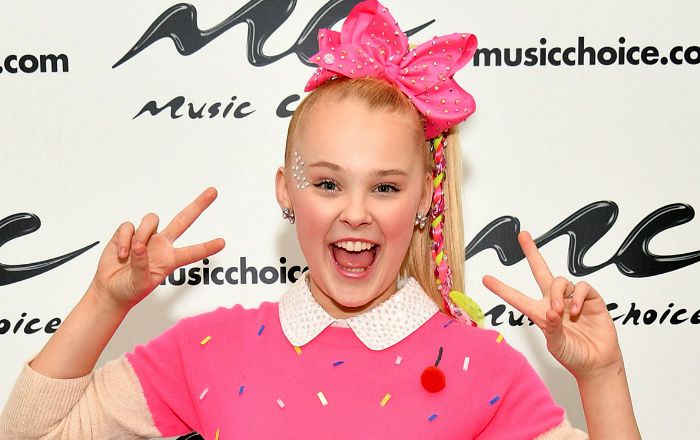 Who is JoJo Siwa?

JoJo Siwa is an American YouTube celebrity, dancer, actress, and singer who gained popularity after she appeared in the fifth-sixth season of ‘Dance Moms’. She is known for her massive popularity on the platform musical.ly which has amassed over 14 million fans as well as her YouTuber channel with more than 5 million subscribers. Her debut song Boomerang has attracted millions of digital views earning the prestigious RIAA: Gold certifications.

JoJo Siwa was born on the 19th of May 2003, in Omaha, Nebraska, United States of America. She’s currently 17 years old.

JoJo Siwa is the youngest of the two children to American parents,
Chiropractor, Dr. Tom Siwa and professional dance instructor, Jessalynn Siwa (née Jessalyn Lombardi). She has an older brother named Jayden Siwa. on the educational front, she attended homeschooling.

JoJo Siwa was reported to be dating singer MattyB after she appeared in one of his music videos, however, she denied it saying she doesn’t have a boyfriend.

JoJo Siwa made her acting debut in 2018, playing the role of Victoria in a television film called Blurt!

In 2013, she made her television appearance by appearing in Lifetime’s dance reality competition series Abby’s Ultimate Dance Competition as a contestant.

She dropped her first track “Boomerang” in 2016, which saw over 16 million YouTube views in less than 2 weeks and received RIAA: Gold certifications.

Her other song credits include “Kid in a Candy Store”, “I Can Make U Dance” and “Hold the Drama”.

The multi-talented damsel has an estimated net worth of $3.5 million US dollars. She earns over $950K annually and makes roughly $2K from YouTube. Her YouTube channel features vlog videos, challenges, songs, and other random content.

Siwa started dancing at the age of 2 and began attending dance classes when she was 5.

She loves hip-hop and jazz dance styles and dislikes ballet.

She was the youngest competitor at Abby’s Ultimate Dance Competition season 2.

She has three dogs named Coco, Lulu and BowBow.

In 2013, she launched her exclusive Jo Jo Collection (Dancewear) with Tilt Dancewear (shop)and in 2016, Siwa released her own line of accessories, including her signature hair bows.