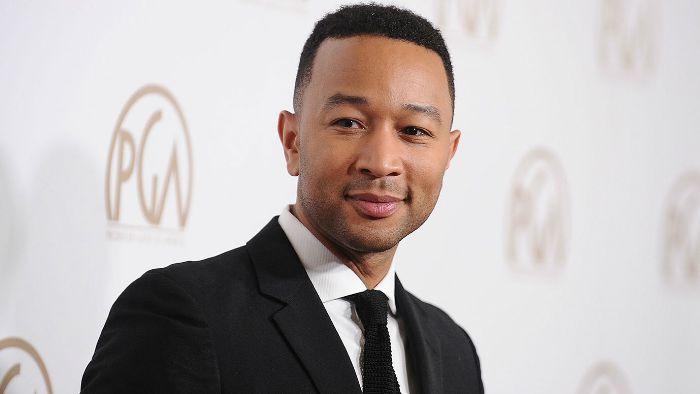 John Legend is a well-known American singer, songwriter, musician and actor, who is best-known for his works such as ‘Once Again’, and ‘Darkness and Light’. Before attaining fame as a independent singer, Legend has had associated with many popular musicians in the industry such as Kanye West, Jay Z, Janet Jackson, Mary J. Blige, The Black Eyed Peas and many others at various segments in his career. Check out John Legend biography, height, weight, body measurements, age, wife, kids, family, net worth and facts.

He is currently 38 years old.

John Legend received elementary education through homeschooling. He was enrolled at the North High School when he was 12, form where he graduated.

After high school, he was offered admission to Harvard University and scholarships to other reputable colleges. But he turned down them and joined the University of Pennsylvania, where he studied English with an emphasis on African-American literature.

Legend began dating his wife, model Chrissy Teigen in 2011. The same year, they got engaged in December and married on September 14, 2013 in Como, Italy. They both share a daughter named Luna Simone Stephens (born on April 14, 2016). They announced on November 21, 2017 that they were expecting their second child.

Unfortunately, John’s body statistics are not available at this time.

John has struggled a lot throughout his life to get into where he is of today. After graduation, he started off his career performing in local nightclubs in New York and used to hold shows in several cities across the country. His isnging career took off when he dropped his debut album, Get Lifted, in December 2004. The album reached number 7 on the US Billboard 200 and also peaked within in the top ten on major music charts through out the world. Selling more than 850,000 copies, the album won the 2006 Grammy Award for Best R&B Album, and earned Legend another two nominal awards for Best New Artist and Best Male R&B Vocal Performance.

His popularity increased dramatically with that album and in 2006, he released his second album, Once Again. It was also a big hit, debuting at number 3 on the US Billboard 200. Its lead single ‘Heaven’ earned Legend his second Grammy Award for Best Male R&B Vocal Performances. Since after that, Legend has released a number of albums, including five studio albums, four live albums, two video albums, three extended plays and 38 singles.

John Legend made his film debut in 2008 with Sesame Street: Elmo Loves You! where he played as himself.

In 2000, John appeared in the TV series Curb Your Enthusiasm, where he played the role of John Legend (himself).

As of 2017, John Legend has an estimated net worth of $23 million US dollars that results form his music sales, tours, television and film appearances, and endorsements. He lives with his family in a ultra-luxury mansion of worth $14 million US dollars located in Beverly Crest neighborhood, Los Angeles. His three-storey house sites on a 8520 square feet of land boasting five bedrooms, eight bathrooms, a billiard with bar, theater, office, gym, and swimming pool.

He chose his stage name from an idea that the poet J. Ivy gave him. J. Ivy said that John reminded him of some old school artists (old school legends).

Legend donated $500,000 to Springfield City School District to renovate an auditorium, which is named in his honor, within the Springfield Center of Innovation.

Legend received the Hal David Starlight Award from the Songwriters Hall of Fame. In 2017, Legend received a Tony Award for co-producing Jitney for the Broadway stag.

He sang a duet song along with Ariana Grande for  the 2017 film Beauty and the Beast.

He loves reading, especially biographies and other non-fiction books.