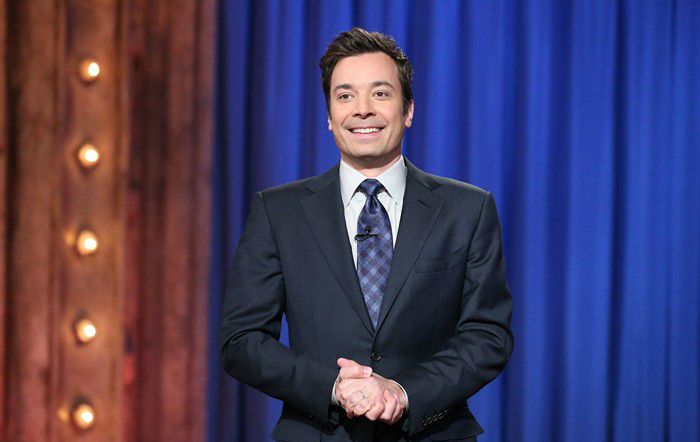 Who is Jimmy Fallon?

Satirical talk shows are always been popular among the Americans since the late ’50s. One such show is “Late Night with Jimmy Fallon”, an award-winning talk show on NBC, was one of the highest-rated shows in the ‘Late Night’ franchise. Previously, he was a cast member of Saturday Night Live and is currently hosting the late-night talk show, The Tonight Show Starring Jimmy Fallon. Jimmy has also acted in dozens of films like “Taxi”, “Arthur and the Invisibles”, “Jurassic World”, “Whip It”, to name a few. He is best known for his impeccable comic timing who has been making people laugh out of hearts for over a decade.

Jimmy Fallon was born on the 19th of September 1974, in Bay Ridge, Brooklyn, New York, United States of America. He is currently 45 years old.

Jimmy Fallon is the son of Gloria (née Feeley) and James W. Fallon. His mother died on November 4, 2017. He has one sister named Gloria Fallon. His paternal grandmother, Luise Schalla, was a German immigrant from Osterholz-Scharmbeck, while one of his maternal great-grandfathers, Hans Hovelsen, was a Norwegian immigrant from Fredrikstad.

Fallon went to a Roman Catholic elementary school, St. Mary of the Snow in Saugerties. He got inclined toward comedy at an early age and began to perform comedy in school shows and contests. He graduated from Saugerties High School in 1992.

During his school days, he had own several comedy contests and also won a young comedian’s contest with an impression of Pee-wee Herman. He then attended The College of Saint Rose in Albany, New York, where he first opted computer science as his major, but later switched to communications in his senior year.

He received his BA in Communication on May 9, 2009, and an honorary degree from The College of Saint Rose.

Prior to his marriage, Fallon has had been in a relationship with fellow stars in the industry, including Winona Ryder, Nadia Dajani, Jordana Brewster, and Tara Subkoff.

He debuted in NBC’s late-night talk show, Saturday Night Live and since then he hosted a number of talk shows and programs, even has his own talk shows.

In August 2002, he dropped his first album, The Bathroom Wall via Dreamworks Records.

Fallon was previously a face of Calvin Klein. He appeared in many television commercials such as Pepsi, Comcast’s X1 entertainment platform, iPhone 6 and iPhone 6+ (voice-over), Armory Garage Inc, etc.

He owns a couple of luxury homes – one in Manhattan which is worth over $1.35 million and the other in Hamptons. He spent $5.7 million for the latter mansion, where he lives with his family. He owns a Bentley and a Mini Cooper.

Ever since the comedian entered the television space, his net worth has skyrocketed over the years, which is estimated to be $60 million as of 2019. When he took over the late-night talk show in 2009, he was paid $5 million. His salary jumped from $5 million a year to $11 million when he took over The Tonight Show in 2014. He is the second-highest-paid talk show host in Late Night franchise.

Raised as a Catholic, Jimmy thought of becoming a priest at his young age.

He was the class clown in his junior high school.

In 2012, Jimmy won an Emmy Award for ‘Outstanding Guest Actor in a Comedy Series’ for ‘Saturday Night Live’.

In 2013, he bagged a Grammy Award for ‘Best Comedy Album’ for ‘Blow Your Pants Off’.

Besides, talk shows, he has two comedy albums and five books to his credit.

During an episode of The Dr. Oz Show in 2011, he had a mole removed on live television by a Cosmetic surgeon, Dr. Arthur Perry.