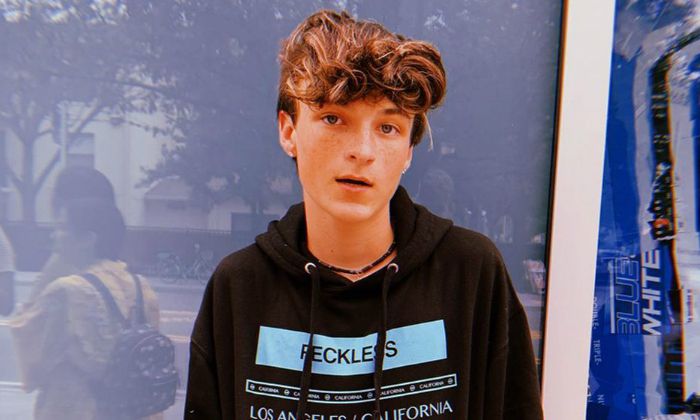 Who is Jackson Felt?

Jackson Felt is an American social media personality and TikTok star who has acquired a large fan following of more than 2 million fans for his lip-sync videos set to the tunes of artists like Meghan Trainor, Will.I.Am, and Nicki Minaj. The young talented starlet loves to entertain people through his lip-sync videos, comical, funny, challenges, and comedy skits. In addition to the ever-growing fanbase on the app, Felt has also garnered a huge fan base on YouTube and other social media apps like Facebook and Instagram.

Jackson Felt was born on the 16th of February 2003, in Florida, United States of America. He is currently 17 years old.

Despite fame and popularity across social media platforms, Jackson Felt prefers not to reveal the details of his family and their background. He grew up along with his siblings, Greyson and Austin Felt, who is also a social media personality.

It seems that Jackson is extremely conscious about his personal life. He respects privacy so that every aspect of his personal life including education, family and his childhood were kept hidden off the public eyes.

Jackson is currently single as he himself confirmed that he is single on Instagram. He took to Instagram to clear the air regarding the rumors about his alleged relationship with fellow TikTok star Trinity Keller. It looks like that the dashing star is focused on building his social media career rather than flirting with girls.

Jackson Felt joined the most happening social media app TikTok sometime in 2018 and garnered tens of thousands of fans within months of joining the app. Just like other TikTok stars, he posted lip-sync videos to the tunes of pop and rap artists like Will.I.Am, Nicki Minaj, Meghan Trainor, Shawn Mendes, Marshmello, Alessia Cara, and others.

Apart from making lip-sync videos to popular songs, Jackson also explored different genres and made videos covering topics like challenges, comedy, funny memes, comedy skits, dance, duets, among many others. His hard work, persistence, talent and most importantly passion paid off him when each of his videos received tens of thousands of views and thousands of comments. His primary TikTok account “jacksonfelt” has amassed over 2 million fans and garnered over 51 million hearts.

Jackson has also a secondary TikTok page called “itsjacksonnn” which he uses to communicate with his fans and posts solo acts. He has also garnered millions of hearts and over 650k fans on it.

He spent most of his time skateboarding and playing soccer during his childhood.

Felt aspired to become a soccer player while he was young, however, with time shifts, he got inclined towards social media.

His big brother, Austin, who is also a TikTok star and YouTuber, has influenced him a lot, leading him to choose social media career.

He owns a personal blog where he sells his merchandise including shirts, iPhone cases, hoodies, and beanies.

He refers to his fans as ‘Felt Fam’, short for ‘Felt Family’.

His ears are pierced.

Jackson posted a photoshopped picture of singer Ariana Grande hugging him and licking his ear in May 2019.

Jackson’s YouTube channel, which has only one video, has managed to earn over 70 thousand subscribers. His Instagram page has over 700k followers.

He loves to wear torn jeans.