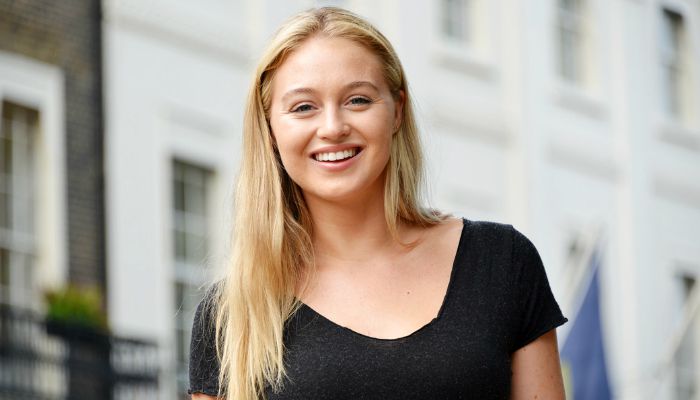 Who is Iskra Lawrence?

Iskra Lawrence is an English model probably best known for her work with lingerie like American Eagle Outfitters, Aerie and Adore Me. She has represented several renowned fashion brands and designers at international fashion shows like New York Fashion Week and paries Fashion Week. Unlike other models, Iskra has accrued a huge fan base for posting her self portraits on Instagram without retouching them, on which she has more than 4.5 million followers.

Iskra Lawrence was born on the 11th of September 1990, in Wolverhampton, West Midlands, England, United Kingdom. She is currently 29 years old.

Despite being a prominent figure in the glamour world, Iskra Lawrence hasn’t revealed much about her family and her early life. She was raised by her father Doug Lawrence, whose profession and other details are unknown. Details about other members of her family are also unknown.

Iskra has been in a long-term relationship with songwriter Philip Payne, which she confirmed in January 2019.

Iskra has guest appeared on an episode of the comedy-drama show ‘Misfits’ as a cheerleader in 2011.

She gained immense popularity in the global market as a plus-size model.

Iskra Lawrence has modeled for various fashion brands and also featured in many commercials.

Lawrence has an estimated net worth of $2 million. This multi-talented personality writes for various magazines about staying healthy and glamour guides. Having a curvy figure and dazzling glamours person, Iskra is very much popular than many swimsuit models.

Despite being famous for her plus-sized figure, Lawrence doesn’t want her to be classified as a plus-sized model.

Iskra was a national level swimmer in school.

She is a model for the American Eagle Outfitters lingerie line, Aerie.

With a modeling career snapping for more than 13 years, Iskra made her runway debut at the New York Fashion Week for Chromat and walked in L’Oréal’s first fashion show at Paris Fashion Week in October 2017.

In 2018, Iskra hosted “The Mirror Challenge with Iskra” a Facebook Watch series from Clevver Media a brand of Defy Media.