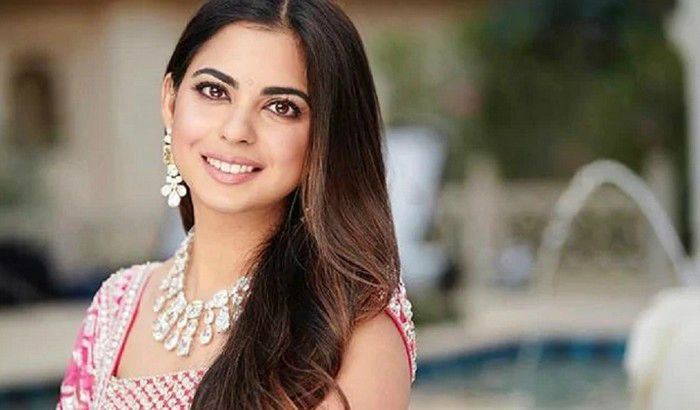 Isha Ambani is an Indian entrepreneur best known as the daughter of Mukesh Ambani and Nita Ambani, India’s richest family. She is one of the members of the board of directors of Reliance Jio and Reliance Retail to which she was inducted in 2014. In 2015, Forbes named her as one of 12 most powerful upcoming businesswomen in Asia. She has a net worth of $660 million.

Isha Ambani was born on 23 October 1991 in Mumbai, Maharashtra, India.

Isha completed her schooling from Dhirubhai Ambani Internationla School in Mumbai and earned her bachelors degree in Psychology and South Asian studies from Yale University in 2014. She completed her masters degree from the Stanford Graduate School of Business in California in 2018.

Isha Ambani is the only daughter of the world’s most powerful man and India’s richest businessman Mukesh and his wife Nita Ambani. She has a twin brother named Akash Ambani, who is also a businessman, and a younger brother named Anant.

Her grandparents are late Dhirubhai Ambani, an Indian business tycoon and founder of Reliance Industries, and his wife, Kokilaben. She is the niece of Anil Ambani, the chairman of Reliance ADA Group, and his wife Tina Ambani. Her cousins are Jai Anshul Ambani, Jai Anmol Ambani, Isheta Salgaocar, Nayantara Kothari, Arjun B Kothari.

Isha Ambani married Anand Piramal, the son of Swati and Ajay Piramal, an Indian billionaire businessman, on December 12, 2018. The star-studded wedding and the most extravagant weddings of this season held at the bride’s family residence, Antilia. The wedding has been graced by Bollywood stars, Cricketers, Politicians and the powerful people around the word. It is being reported that the wedding has cost Ambani family over US $100 million.

Isha’s net worth is estimated to be $660 million (Rs 4.710 crore). She owns several exotic cars, including Range Rover, Porsche, Mercedes Benz, Bentley and Mini Cooper. She also owns a swanky house worth Rs 53 crore in Mumbai.

After graduation, she briefly worked as a business consultant with McKinsey & Company, a management consulting firm.

While in college, she was part of the University Soccer team.

Isha and her brother Akash are the board of directors of Reliance Jio and Reliance Retail and they both oversee the company’s operation since its inception.

In December 2015, She and her brother launched Jio 4G service, India’s first IP network, for the company employees in the presence of the brand’s ambassador, Shah Rukh Khan.

In April 2016, Ambani launched AJIO, an online fashion retailer, at the 2016 edition of Lakme Fashion Week.