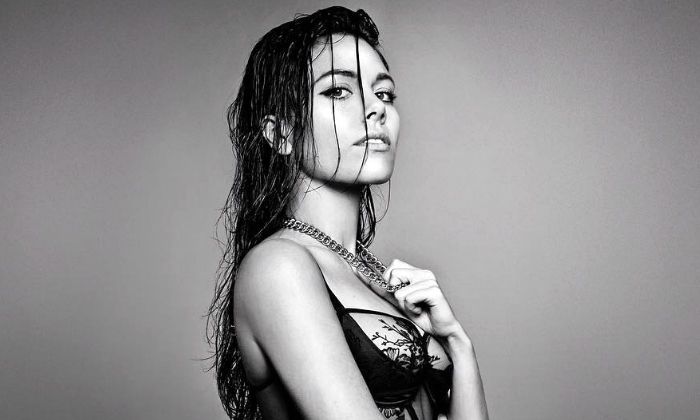 Who is George Maple?

George Maple aka Jess Higgs is a singer and songwriter from Sydney, Australia, who made a good first impression as a singer when she guest appeared on Flume’s self-titled debut album in 2012. Over the next few years, she continued to capture the industry’s attention through the songs she sang for other artists like Deetron, Snakehips, Slime, Goldroom, and What So Not. That early display on the pop world not only gained her tons of followers but a lucrative career. Maple achieved huge success with the release of her full-length debut album, Lover, which reached #2 on the Australian iTunes Chart. Besides all this, Maple has an incredible stunning body which she often offers a glimpse to her Insta fans as she poses in many provocative outfits.

George Maple was born in the year 1991 in Sydney, Australia. She is currently 28 years old.

There’s not a lot we have to share regarding her family background or her early life as she has tried to keep every aspect of her personal affairs away from the media. We tried to get a few basic details about her from her interviews, but she has not mentioned anything about her family in any of the interviews she had given to major publications.

Maple began writing music when she was just nine years old and took it seriously as she moved forward with her life. She learned how to play the piano all by herself. Throughout her high school years, she gigged around her hometown, singing covers of her favorite songs at local venues.

She went to college, where she studied media and journalism.

Concerning her love life, George Maple is possibly single as she never dated anyone publicly. Her fans are curious to know about her present relationship status, but she doesn’t talk a lot about her private life when asked about it.

Well, she was in a relationship in the past, and she isn’t afraid to admit it. In fact, her album, Lover, is an emotional narrative of her relationship, comprised of songs that takes us through her relationship from start to end. which she began writing when she began dating her ex-boyfriend and So, it’s safe to assume that she doesn’t have a boyfriend now, and we can surely say she is focusing on her career than getting hooked up with someone else.

Three years later, she released her debut album, “Lover” on October 27, 2017, on Virgin/EMI. The album spawned hit tracks “Where You End and I Begin” and “Sticks and Horses” featuring GoldLink and “Buried” featuring Rome Fortune; with What So Not. The album managed to reach #2 on the Australian iTunes Chart.

Maple is a self-made musician, blessed with seductive, captivating and yearning vocals and pursuing a fruitful career in it. Most of Maple’s claim to fame is her debut album Lover that explores the intimacy part of life. The album has 20 tracks and brings out all the layers and depths of a relationship.

Unfortunately, details about her net worth are unknown.

Like mots of the creative people out there, George Maple uses social media to thrive in her music career. On Instagram, she has an impressive 20 thousand plus followers, and the number is growing still.

Also a fashion icon, Maple often wows her Insta fans with her creative and colorful looks that she conceptualizes and inspired by. She has over 6k strong followers on Twitter and over 40k followers on Facebook. She runs a self-titled YouTube channel where she mostly uploads her official music videos. It has over 6k subscribers.

Having raised in the northern beaches of Sydney, Jess Higgs jiggles between Los Angeles, London, and Sydney.

She developed an interest in music from a young age.

Before fame, she worked at Pizza Hut for two months and left the job after she realized that she could make more money by singing jazz covers in local events and night clubs.

Jess Higgs adopted her stage name George Maple as a mask to freely express herself. She considers her stage name as an extension of her inner persona.

Maple has worked with artists like Flume, Hayden James, DJ Snake, What So Not, Goldroom, Guy Sebastian, and Flight Facilities.

She has performed at Coachella, Lollapalooza, and EDC Vegas and headlined her own show in Los Angeles.

In 2019 Maple launched her concept performance ‘Utopia’ and announced the launch of her multi-medium production company ‘The Process.’

Maple dropped her latest track “Magic Women” from her upcoming album in 2019.

She has been featured in many renowned magazines like Vogue, Interview, and ELLE.