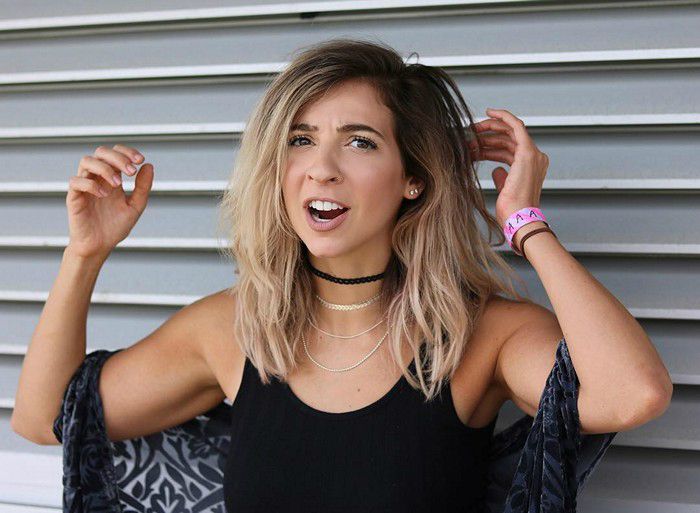 Who is Gabbie Hanna?

Gabbie Hanna was born on the 7th of February 1991, in New Castle, Pennsylvania, United States of America. She is currently 29 years old.

Not much is known regarding Gabbie’s personal details as she hasn’t disclosed any details about her parents and her early life with the media. She was born the third of seven children to her parents.

Gabbie has six siblings – Cherisa, Monica, Cecilia, Genevieve, Madelynn, and Sam. Her older sister, Cecilia, is also a social media personality. She is of mixed ethnicity as she has Lebanese, Slovak, Polish, French and German roots.

She attended New Castle High School in New Castle, Pennsylvania. After that, she attended the University of Pittsburgh, where she majored in psychology and communications.

Gabbie Hanna is very secretive when it comes to her relationship status as she has kept her romantic life away from the media. Details regarding her present and past relationships are unknown.

However, when you are as popular as she is, it gets hard to keep the information all to yourself. Hanna revealed in August 2019 that she is in a romantic relationship with her boyfriend Payton Saxon.

This budding lass, after her graduation, joined Vine and YouTube and started posting hilarious videos that quickly found its targeted audience, grabbing her insane amount of fans in a short period. In a matter of time, her popularity on these platforms increased making her explore different genres and obviously, she joined other social media platforms too.

When Vine shut down its operations in early 2017, she had already amassed 4.7 million fans. By the time she celebrated the third anniversary of her YouTube channel, “TheGabbieShow” she managed to accumulate 5 million subscribers and 400 million views. Like other popular internet celebrities, Gabbie also often associate with famous stars including Landon Moss, Jessie Smiles, All James, and Brennen Taylor. Her most popular upload, Remaking My 14 Year Old Sister’s Cringey Musical.lys has been viewed over 22 million times. Today she boasts of having millions of followers and subscribers across social media platforms like YouTube and Instagram.

In 2014, Gabbie Hanna appeared as herself in an episode on the American weekday entertainment program, Access Hollywood. Thereafter, she had been a cast of a number of television shows and series. In 2017, she joined the main cast of Escape the Night as ‘the Vaudevillian’ and appeared in seven episodes

Hanna’s net worth is estimated at $2 million US dollars. Her main source of income comes from monetizing her videos on different platforms indeed, television appearances and lucrative endorsement deals. Above all, she also makes money form singing and world tours. She bought a luxury house worth $2.5 million in July 2019.

One of the most popular female stars on Vine up until the time of its closing, Gabbie Hanna currently has over 6.5 million subscribers on Youtube, 1.4 million fans on Facebook. 2.8 million followers on Twitter and 3.6 million fans on Instagram.

In 2015, she competed and won season 4 of Dance Showdown with Matt Steffanina as her partner.

Hanna released her debut book, Adultolescence on September 19, 2017, which chronicles Hanna’s struggles throughout her life in a fun, poetic way.

In November 2016, Hanna made her first stand up show at an improv comedy club in Los Angeles, California.

In 2017, she joined the social media team of MTV. From that, she hosted backstage for the MTV Video Music Awards in August and co-hosted the revival of Total Request Live in October, with fellow Internet personalities Eva Gutowski and Gigi Gorgeous.

In January 2018, Hanna was nominated for YouTuber of the Year at the 10th Annual Shorty Awards and for the Social Star Award by iHeartRadio at the 2018 ceremony.