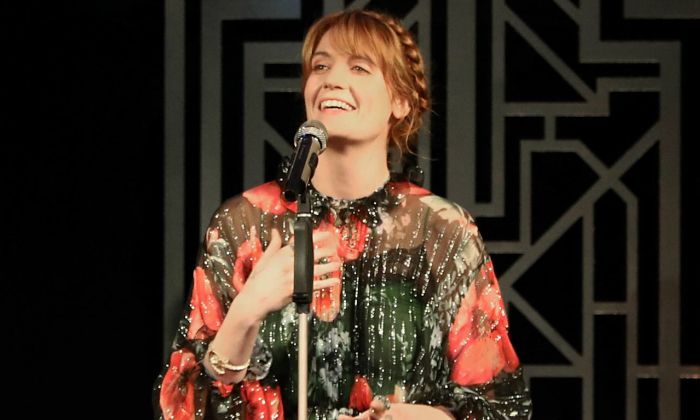 Who is Florence Welch?

Florence Welch is an English singer and songwriter who is best known as the lead vocalist of the indie rock band Florence and the Machine. Having been in the pop scene from an early age, she created her own band with her high school friends. The band released their debut album “Lungs” in the year 2009, which comfortable stayed on the top op the UK chart for 28 consecutive weeks, eventually winning the Brit Award for Best British Album. The success of the album propelled her fame and she further gained international popularity with the second and third albums, “Ceremonials,” and “How Big, How Blue, How Beautiful,” respectively. In April 2019, Welch caught the spotlight for good when her rendition of “Jenny of Oldstones” got featured on the season eight of the HBO fantasy drama series, Game of Thrones.

Florence Welch was born on the 28th August of 1986, in London, England, United Kingdom. She is currently 32 years old/

Florence Welch hails from a family of academics, where her father, Nick Russell Welch, works as an advertising executive and her mother, Evelyn Kathleen Welch, is an academician. She studied at Harvard University and the Warburg Institute, University of London, and currently works as a Professor of Renaissance Studies, Provost, and Senior Vice President (Arts & Sciences) at the King’s College, London.

She is the niece of the satirist Craig Brown and the granddaughter of Colin Welch (James Colin Ross Welch), who was a former deputy editor of The Daily Telegraph and former Daily Mail parliamentary sketchwriter. Her maternal uncle is actor and director John Stockwell.

As for her educational qualifications, she attended Thomas’s London Day School and then studied at Alleyn’s School, South East London. In school, she was good in academics, which comes to no surprise, as the blood of her mother flows through her veins. After graduating from school, she enrolled at the Camberwell College of Arts, but she never finished her college as she dropped out in the middle in exchange for her musical career.

Speaking about her romantic life, Florence Welch is possible single. She had previously dated literary editor Stuart Hammond and visual special effects developer James Nesbitt, however, none of the relationships didn’t end in marriage.

Welch made her acting debut, starring in a drama musical film Weightless in 2016.

As a lead vocalist of the band, Florence and the Machine, Florence released their first album entitled “Lungs” on July 3, 2009, through Island Records. The album debuted at #2 on the UK music chart and climbed up a position to number one on January 17, 2010. It also clinched the numero uno position on the ‘Billboard Heatseekers Albums’ chart and peaked at #3 on the ‘US Top Rock Albums’ (Billboard) chart. The Album spawned hit singles “Kiss with a Fist”, “Dog Days Are Over”, “Rabbit Heart (Raise It Up)” and “You’ve Got the Love” as well as received 5× Platinum certification from British Recorded Music Industry. She was awarded the British Album of the Year award at the Brit Awards in 2010.

Florence Welch is best known for her albums, including Lungs, Ceremonials, How Big, How Blue, How Beautiful and High as Hope.

Florence Welch has accumulated a net worth of $14 million over the years from her career as a singer and songwriter.

Her mother married their next-door neighbor, Professor Peter Openshaw following the divorce of her parents when she was 13 years old. The strings of events that happened in her life during that time took a toll on her, and eventually, she got addicted to drinking and other bizarre wild stuff.

She explored her love for music at a very young age and it was her paternal grandmother, Sybil Welch, (née Russell), who pushed her to hone her singing and performing talents.

As a child, she sang at weddings and funerals.

Florence and and her friend Isabella “Machine” Summers formed the indie rock band “Florence + the Machine” in 2007.

She has both British and American citizenship.

She is good friends with Taylor Swift and Blake Lively.

According to her, Fleetwood Mac pop/rock singer Stevie Nicks is her musical, fashion, and general influence.

She broke her foot after jumping off the stage at the Coachella Festival in 2015.

Florence has a great sense of dressing style, which is often described as “the queen of Bohemian style” by the media.

She has a contralto vocal range.

Welch published her first book Useless Magic: Lyrics and Poetry in July 2018, which is a compilation of her lyrics and poetry, alongside illustrations.

In an interview, she confessed that she used to booze before ever performance, quoting, “I’m quite shy, really—that’s probably why I used to drink a lot. But I don’t anymore.”

She is a book-worm, influenced by authors like David Vann and Kirsten Reed and poets like Ted Hughes.

In 2019, she performed “Jenny of Oldstones”, a song appearing in George R. R. Martin’s novel “A Song of Ice and Fire”, in episode two of season 8 of the fantasy series, Game of Thrones, went viral, garnering million of views.