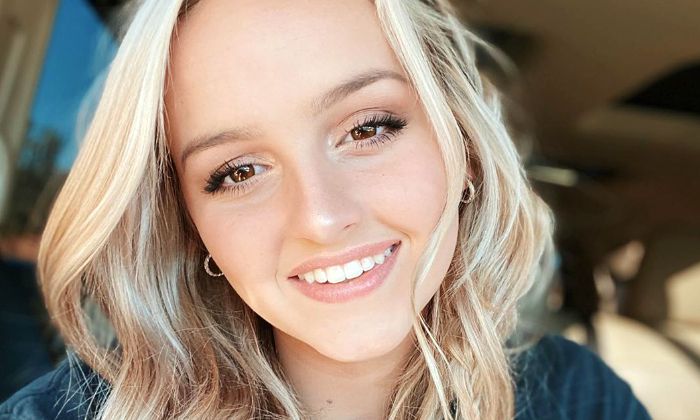 Who is Evie Clair?

Evie Clair is an American singer and pianist who shot to prominence after appearing on the 12th season of the reality series America’s Got Talent. Her debut album “Okay Day” arrived in June 2018 and reached the top 50 on the iTunes pop chart. The budding artist has been writing songs and performing them ever since she was a toddler. She started taking piano lessons when she was just 2 years old and at age 8, she was already performing as a tap dancer in musical theater productions like Annie. In 2018, she did a headline act in ‘The Unbelievables Christmas spectacular’ in Reno, Nevada.

Evie Clair was born on the 2nd of December 2003, in Florence, Arizona, United States of America. She is currently 16 years old.

Evie Clair is the second of five children to her parents, Hillary and Amos Abplanalp. She grew up along with her four siblings – three sisters and one brother – in her hometown of Arizona who are also musicians.

Her father died of cancer on September 7, 2017, when she was in the midway of the competition. Though judges asked her to leave the show and return the next season, she opted to move on to the finals and performed the song, “Wonderful World,” her dad’s favorite song, as a tribute to him.

As far as her education is concerned, she hasn’t revealed anything regarding that, however, considering her age, she should be doing her high school. It is not known whether she is attending a regular school or pursuing it through a homeschooling program.

It’s no doubt that this stunningly young beautiful singer is turning the heads of several men. Evie has already proven her mettle as a singer to the world. She is truly a sight to behold and has achieved a lot of fame at such a young age, thanks to her soulful voice and gorgeous body figure.

Speaking about Evie Clair’s personal life, she is a very private person and hasn’t revealed anything about her relationship status. She is possibly single and is happily enjoying every minute of her life. It looks like Evie has no regret of being single.

Evie Clair has never been romantically linked to anyone in the present or in the past. We looked up her Instagram account, but it is mostly filled with her portraits and the places she traveled across the world.

Evie Clair released her studio debut album “Okay Day” on June 1, 2018, which reached the top 50 on iTunes. The album featured 10 songs and all songs except the lead track “Okay Day” was performed by Clair. The lead song was rendered by Kirra L.A.

Though Evie has made a mark by starring in the musical Annie as well as singing the national anthem at an Arizona Diamondbacks’ game, her rise to stardom occurred only after competing in the twelfth season of the talent competition series America’s Got Talent.

Her performance throughout the show earned her many fans that eventually made her one of the most favorited contestants. She did justice to all the songs she performed during her run on the show. Her poignant performance at the finals, not only moved the judges and audiences but also left them in tears.

Regertebally, the exact details of her net worth remain unknown.

In addition to being a successful singer, Evie is also known for her strong personality and staying true to her values without holding herself above anyone else and truly loving people. By combing her passion and beauty she has become someone that everyone admires.

Her Facebook page has over 125 thousand followers. She also has a self-titled YouTube channel, which has over 115 thousand subscribers.

She began playing the piano when she was just two years and old. She also took vocal lessons as she grew up.

Her mother is a music teacher.

As a passionate singer, Evie often performed at her school’s events and shows.

She is a well-known face in her hometown as she has performed at several clubs and events and played Molly in Anne at the Hale Theater when she was just eight years old.

Evie Clair and her family are members of The Church of Jesus Christ of Latter-day Saints.

In 2015, Evie bagged an opportunity to sing the theme for the film, Once I Was a Beehive.

Before earning a spot on Season twelve of America’s Got Talent, Evie has already auditioned twice in a row but with no luck.

Her rendition of Christina Perri‘s song “Arms” earned her praise from judges for her utmost honesty to the song.

Evie has been featured on NBC, Billboard, USA Today, MSN, Fox News, Today, Google, The Washington Post, among many others.

Her video cover of A-ha’s “Take On Me” won an award from the Arizona Interfaith Movement and was presented at the Parliament of the World’s Religions.

Delta Airlines used her single in their holiday campaign Kindness Connects Us.

Evie was the headliner for a long-running Christmas show in Reno, Nevada called The Unbelievables.