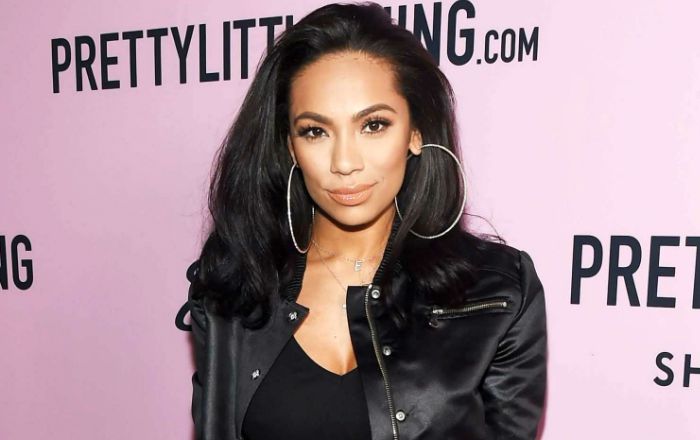 Who is Erica Mena?

Erica Mena was born on the 8th of November 1987, in The Bronx, New York City, New York, United States of America. She is currently 32 years old.

While not much is known regarding her immediate family as well as her educational affairs, Erica Mena is the youngest daughter to her parents. she has one older sister. She is of Puerto Rican & Dominican descent.

Erica Mena has had dated quite a bunch of stars during her career. In 2014, she began dating American actor and rapper, Bow Wow and eventually got engaged with him. But the couple ended their relationship shortly.

She was romantically linked with actor Shad Moss and Rich Dollaz and also briefly dated Hip Hop Season 4 co-star, Cyn Santana in the past.

She has a son, King, from rapper Raul Conde. She was in a relationship with Cliff Dixon for a while before ending up with rapper and TV personality, Safaree Samuels. They became engaged on Christmas Eve 2018. In October of 2019, they announced that they are expecting their first child together. The beautiful couple married at The Legacy Castle in New Jersey on October 7, 2019.

She hasn’t acted in any film yet.

Mena made her television debut in 209 when she appeared in the reality show Kourtney & Khloe Take Miami as herself.

Erica released an album named “Where do I go from here” in 2014 which is available on the sound cloud.

She earned lots of fame after appearing in the reality show Love & Hip Hop: New York as well as hosted a lot of reality shows.

Erica has done print ad campaigns for Tommy Hilfiger, Loreal, Roca Wear, among others. She served as a spokesperson for several domestic and international companies.

Erica has a total net worth of $500 thousand dollars.

She had a very difficult childhood due to her abusive father, who was a drug dealer. She was raised by her sister and that her early life had left a scar in her.

Erica started drawing sketches when she only 8.

Her career propelled when she won the MTV, ‘Jenifer Lopez Look- Alike’ contest. After that, she started to appear in music videos and eventually became a prominent model in the glamour world.

Erica has appeared in numerous music videos for Chris Brown’s “Yo (Excuse Me Miss),” Fabolous “Breathe”, as well as videos for Fat Joe, Akon, Bobby Valentine, Lil Wayne, and others.

At the age of 16, she won her second MTV contest called ‘Say What Karaoke’.

Erica published her autobiography Underneath It All in April 2013, followed by Chronicles of a Confirmed Bachelorette.

Erica Mena was featured on the pages of MAXIM, KING Magazine, The Source, and XXL Magazine to name a few.

She had collaborated with Randa Quraan of ‘Socially Loud’ for some time and created ‘HER’, a clothing line by Erica Mena. In fact, in 2015, in the 5th season of ‘Love and Hip Hop’, she wore clothes of her own ‘Spring – Summer’ collection.

Currently, Mena is a part of VH1’s #1 Television show, “Love & Hip Hop: Atlanta”, which is recording its 7th Season.