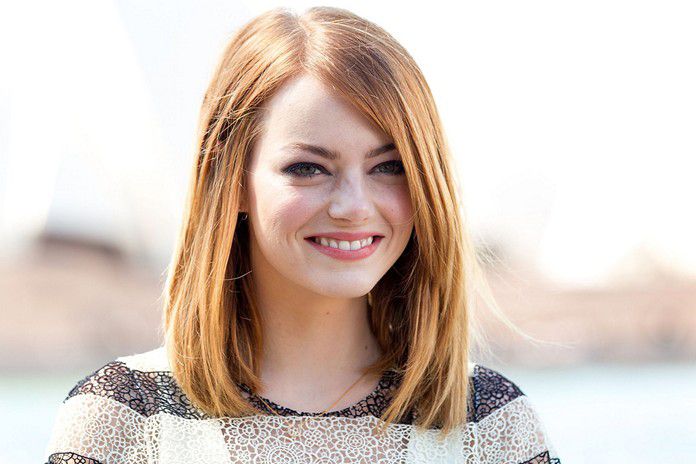 Who is Emma Stone?

Emma Stone is an American actress perhaps best known for playing Mia Dolan in the 2016 super hit musical film La La Land. She won several awards for her stupendous performance including an Academy Award and a Golden Globe, among others. She is one of the most successful actresses in Hollywood who has made some bucks out of it. Her other major works include Zombieland, Easy A, The Help,  Birdman, and The Amazing Spider-Man film series.

Emma Stone was born on the 6th of November 1988, in Scottsdale, Arizona, United States of America. She is currently 31 years old.

Emma Stone is the older daughter of Krista Jean Stone (née Yeager) and Jeffrey Charles Stone, the founder, and CEO of a general contracting company. She has a younger brother, Spencer Stone.

Her paternal grandfather is Swedish by the origin and so is her father. Her mother is of German, English, Scottish, and Irish ancestry.

Stone attended Sequoya Elementary School and then Cocopah Middle School for sixth grade. After that, she got herself enrolled at the Xavier College Preparatory, an all-girl Catholic School, but dropped out after the first semester to pursue acting.

Emma is currently in a relationship with Saturday Night Live writer and segment director, Dave McCary. They began dating in 2017. Shortly after Emma and Dave announced their engagement in December 2019, they tied the knot. The exact date of their marriage is yet to be revealed by them but it was the People magazine that broke out the news first and other publications followed suit.

Stone dated her The Amazing Spider-Man co-star Andrew Garfield from 2011 to 2015. It was mostly an and off kind of relationship and they are still on good terms even after breakup.

She was previously in relationships with actors Teddy Geiger and Kieran Culkin.

Emma Stone made her acting debut with the 2007 comedy film Superbad for her role as Jules. She won the Young Hollywood Award for Exciting New Face for her first film.

Her breakthrough came in 2010 in the teen comedy Easy A. It was her first leading role as an actress.

Stone made her television debut in the unsold pilot for the reality show The New Partridge Family in 2005.

Her role in the romantic film, La La Land in 2016, can be regarded as the most significant work in her career so far. Directed by Damien Chazelle, the film had Ryan Gosling starring in the lead role alongside John Legend, Rosemarie DeWitt, Finn Wittrock, and Jessica Rothe. The film won a total of six Oscars in 2017.

Her portrayal of Gwen Stacy in films, The Amazing Spider-Man, and its sequel earned her fame and made her known to the worldwide audience. Both films were a huge commercial success, grossing more than $1.4 billion worldwide.

Emma has appeared in print ads and TV commercials for Revlon.

Emma has an estimated net worth of $30 million. She lives in a lavish exquisite mansion valued at $2.5 million in Beverly Hills, Los Angeles, which was once owned by popular English actor Dudley Moore. She owns a Mini Cooper and an Audi A6.

She got her screen name Emma Stone since her original name is Emily Stone was already taken at the Screen Actors Guild.

Emma Stone started acting at age four and took voice lessons for several years. She had her first acting role at the age of 11 in a stage production of The Wind in the Willows, playing the part of Otter.

She wanted a career in sketch comedy initially but shifted her focus toward musical theater.

In 2011, she appeared in Victoria’s Secret’s list of What is Sexy? as the Sexiest Actress.

Emma appeared in the 2013 Celebrity 100, a compilation of the 100 most powerful people in the world.

Stone is a good friend of Taylor Swift.

She has a dog named Ren.

She suffers from asthma.

In 2017, she was featured by Time as one of the 100 most influential people in the world.

Emma got her ears pierced at 21.

She was named as the Sexiest and Most Beautiful Woman by several publications fro many years.