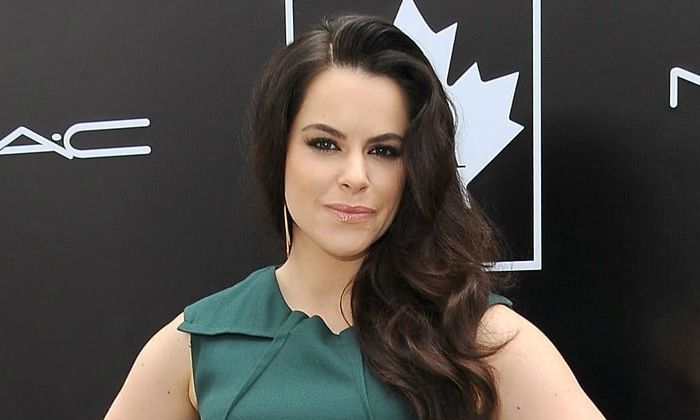 Who is Emily Hampshire?

Emily Hampshire is a multiple Canadian Screen Awards-winning actress from Montreal, Quebec, Canada. She shot to prominence for her role as Angelina in the 1998 romantic comedy Boy Meets Girl. Her other notable performances include parts in Snow Cake, Cosmopolis, My Awkward Sexual Adventure, The Returned and The Death and Life of John F. Donovan. On the television front, Emily is best known for her portrayals of Jennifer Goines in the Syfy drama series 12 Monkeys and Stevie Budd in the CBC comedy series Schitt’s Creek.

Emily Hampshire was born on the 29th of August 1981, in Montreal, Quebec, Canada. She is currently 38 years old.

Very little is known about her family and her early life. Her father, Dr. Robert Hampshire aka Bob, is a dentist. Details about her mother are unknown. She has two step-sisters, Sasha Heart and Athena Joseph.

Emily was educated at a girls’ Catholic high school, Queen of Angels Academy but she’s a school drop-out.

Having discovered her passion for acting at a young age, she was later admitted into the American Academy of Dramatic Arts (AADA) but decided not to attend the performing arts conservatory, rather to pursue her dream of becoming an actor as she was offered a role in a film.

Hampshire was married to Matthew Smith, a former soccer player turned agent-in-training at the William Morris talent agency, from 2006 until their divorce in 2014.

She began dating singer-songwriter Teddy Geiger in 2018 and got engaged in November of that year. They called off their engagement on June 10, 2019.

Emily Hampshire made her acting debut with the 1997 film titled “Dead Innocent” where she played the role of Nicole.

Emily landed her first television role as Sandy Campbell in the Canadian horror anthology series named “Are You Afraid of the Dark?” in 1994. She appeared in an episode titled “The Tale of Cutter’s Treasure: Part 1” and two years later, she played the character named Heather in the same series.

She has been working in the Canadian film and television industry for over 25 years and has achieved great success as an actress. She landed the role of Stevie Budd in the Canadian sitcom “Schitt’s Creek” in 2015 and has been playing the part since then.

Emily earned a lot of fame and recognition for her work in the series that subsequently won her several awards including Canadian Screen Awards for Best Performance by an Actress in a Featured Supporting Role or Guest Role in a Comedic Series consecutively from 2015 and 2019.

Though the exact net worth of Emily is not known at the moment, several sources have claimed her worth to be around $700,000, as of 2019. She has made a huge wealth from her steadily rising career as an actress.

Through her works as an actress, Emily has accomplished a lot and has inspired many people to follow in her footsteps. Her contribution to the industry has been nothing short of stunning. She owes much of her popularity to her Instagram page, where she has 260,000 followers. She has over 75,000 followers on Twitter and more than 15,000 followers on Facebook.

Emily developed an interest in acting at the age of 11 when she watched Les Miserables at Place des Arts with her mother.

She was very attractive and was very popular in her school mostly thanks to her gorgeous looks, which landed her the role of Anne Shirley in a high-school production of Anne of Green Gables. Stunned by her performance, the vice-principal of the school praised her performance and advised her to pursue acting.

She was just 14 years old when she was cast in the TV series Are You Afraid of the Dark?

Emily is a close friend of Canadian actor, comedian, and screenwriter, Jay Baruchel.

She is also a good friend of Caitlin Cronenberg.

She moved to Los Angeles in 2004 and became a naturalized U.S. citizen in September 2014.

Emily is a very passionate actress that she got trained in pole dancing for her role in the 2012 film My Awkward Sexual Adventure.

In 2018, Emily played the role of Amy Bosworth in Xavier Dolan’s independent film The Death and Life of John F. Donovan, alongside Jessica Chastain, Kathy Bates, and Susan Sarandon.