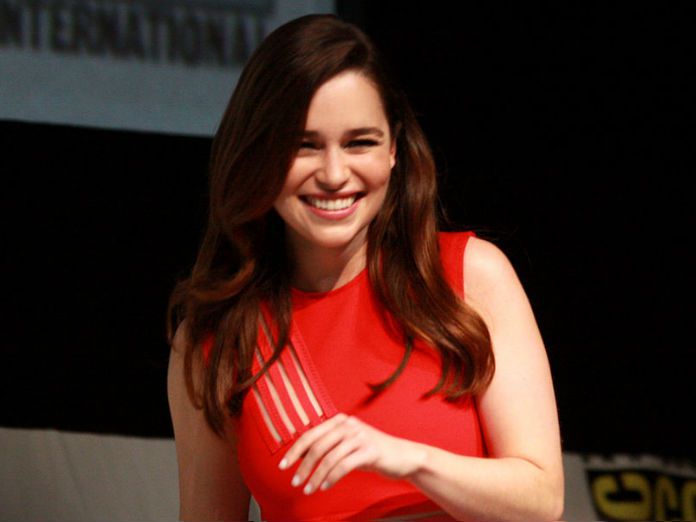 Who is Emilia Clarke?

Emilia Clarke is an English actress who caught the eyeballs of the global audience with her stunning portrayal in the American fantasy series, Game of Thrones as Daenerys Targaryen since 2011. This spectacular next door British actress made her debut in the entertainment industry with her guest appearance in the British soap opera Doctors in 2009.  Clarke is one of the few actresses out there, who would never commit in projects that could disappoint her fans. She has established herself a prominent place in the elite list of actresses of the entertainment industry. In films, she has starred in Terminator Genisys, Me Before You and Solo: A Star Wars Story. Being a successful actress in the business, Emila Clarke also has a huge fan following on social media, thanks to her good looks and charismatic personality.

Emilia Clarke was born on the 23rd of October 1986., in London, England, United Kingdom. She is currently 34 years old.

Clarke attended Rye St Antony School and then St Edward’s School in Oxford and graduated in 2005. While she was at school, her mom said her not to do drugs, sex and leave her eyebrows untouched. She was bullied at school for her eyebrows.

After high school, she enrolled at the Drama Centre London to study theatre and fine arts and graduated in 2009. Around that time, she had appeared in a number of stage dramas. While studying in college, she used to work in an ice-cream shop in Oxford for pocket money.

Emilia Clarke is currently in a relationship with American film director and writer, Charlie McDowell.

Her past relationships include –

James Franco, American Actor (2013) – There were reports that Clarke has dated actor James Franco in 2013, but apparently, there was no proof to prove those claims.

Cory Michael Smith, American Actor (2014) – Clarke was spotted with the American actor, Cory Michael Smith on several occasions from March 2014 to late 2014. She has been close to him which is more than enough to speak about their relationship.

She was first seen in the British soap opera, Doctors in 2008. She has just made gust appearance in the episode titled, Empty Nest.

Clarke is best noted for playing Daenerys Targaryen in the HBO fantasy series, Game of Thrones, alongside Peter Dinklage, Kit Harington, Maisie Williams, Sophie Turner, Nikolaj Coster-Waldau and many others. She has been cast for over seven years for which she has received many accolades and nominations.

Emilia has endorsed a number of leading brands like the Versace and Louis Vuitton. In November 2015, she became the brand ambassador for Dior’s new Rose De Vents fine jewelry line.

In 2017, she became the face of Dolce & Gabbana’s new Eau de Toilette, ‘The One’. She has also signed endorsement deals with CoverGirl Cosmetics.

The mind-blogging and captivating endurance have made her one of the richest actresses in London, who has an estimated net worth of $20 Million. In the last season of Game of Thrones, her remuneration was about $1.1 Million US dollars for each episode. She has become one of the top-paid TV actors lately,  Her career graph in terms of popularity and money factor is mind-blowing that has left many dazed and absolutely captivated.

Emilia Clarke owns a range of cars from brands including BMW, Acura, Audi, and Range over.

She lives in a luxurious house in Hampstead, London that comprises all the amenities including a swimming pool. She brought this house in 2015 and its present value is estimated to be $1.7 Million US dollars. In 2016, she purchased an exquisitely designed house in Los Angeles overseeing Venice Beach for $4.64 million.

Emilia’s popularity on social media is more than evident to say that she has a bright future in the entertainment world. She has a staggering 28 million followers on Instagram. Follow her on

If Emilia were not an actress, she would have been an Architect, Singer or a Graphic Designer.

Clarke developed an interest in acting when she was just three years old by seeing her dad working in the musical, Show Boat. She studied Drama and Theatre Arts, and subsequently performed in many stage dramas.

Emilia drinks a lot but does not smoke.

Asides from acting, she is also good at singing cabaret and jazz and playing instruments like guitar, flute, and piano.

Emilia Clarke had only an hour to ready for her auditions for the Game of Thrones. She performed fancy ‘Chicken and robot dance’.

Before rising to stardom, she did many low profile jobs, including bartending, restaurant, call center, etc to meet her ends.

Emilia was considered the role of Anastasia in the movie Fifty Shades of Grey (2015) but she turned it down as it required her to go nude.

Emila played the role of Sarah Conner in Terminator Genisys alongside  Arnold Schwarzenegger for which she took weapons training. She later regretted playing it as she felt it was too early for her to accept such roles, which earned her unfavorable reviews.

Clarke has been nominated three times for Primetime Emmy Awards in the category Outstanding Supporting Actress in a Drama Series for Game of Thrones.

In 2014, She was named the most desirable woman in the world by Askmen and was named Esquire’s Sexiest Woman Alive the following year.

Emilia Clarke has graced the covers of the world’s reputable magazines like Vogue (May 2015 edition) and Rolling Stone (July 2017 edition).

Clarke is always seen in below-the-knee outfits and, in fact, she still looks stunning in any dress she wears, making her fans to go gaga for her.

She was named one of the 100 most influential people in the world in 2019 by Time magazine.