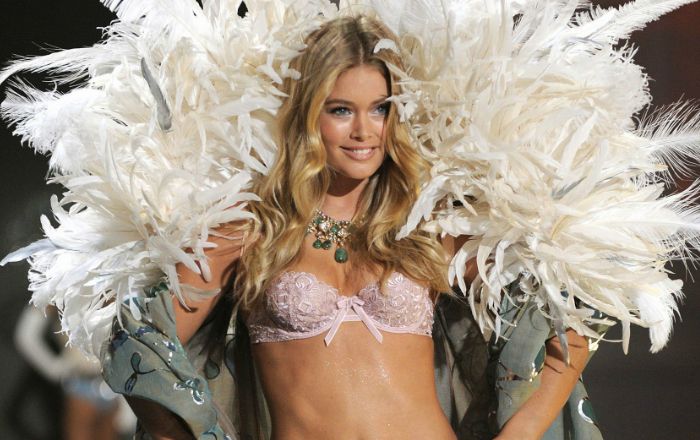 Doutzen Kroes is a popular Dutch supermodel and actress best known for her work with the lingerie giant Victoria’s Secret. She walked in Victoria’s Secret Fashion shows from 2005 through 2014 and served as a Victoria’s Secret Angel from 2008 to 2014. She has been a brand ambassador for Miu Miu since 2013, L’Oreal since 2011 and Victoria’s Secret since 2008. She’s one of the most sought-after and highest paid models in the industry. In 2014, she topped the Forbes top-earning models list, with estimated earnings of $8 million in the previous financial year.

Doutzen Kroes was born on January 23, 1985, in Oostermeer, Friesland, Netherlands.

Though there is no sufficient information regarding her education, it looks like she has completed her school education before plunging into the modeling world.

Doutzen Kroes married Dutch DJ Sunnery James in Eastermar on November 7, 2010.  The couple has two children together. She gave birth to their first child, a son Phyllon Joy Gorré on January 21, 2011, and gave birth to her second child, a daughter Myllena Mae Gorré on July 30, 2014.  Both children were born in Amsterdam, Netherlands.

Doutzen Kroes debuted in Ready to Wear – Spring / Summer 2004 as a model.

Doutzen had her first onscreen role in the 2011 Dutch movie, “Nova Zembla”, in which she played the role of Catharina Plancius.

She has starred as Venelia in “Wonder Woman” and “Justice League”. Both movies released in 2017.

Her first television appearance was in the “The Victoria’s Secret Fashion Show” in 2005. She also co-hosted four episodes of a Dutch TV show, RTL Boulevard between 2009 and 2011.

Doutzen Kroes has a net worth of $24 million.

She aspired to be a professional speed skater when she was young because both her parents were speed skaters champion.

She was a tomboy in her youth.

She also holds the record for most Vogue covers in a single year with nine, including four prestigious international September covers in 2013.

She was ranked at #9 in the Top Sexiest Models list by models.com.

She was named as one of the “most desirable” famous women for 2013 in Askmen’s list of the Top 99 Most Desirable Women.

She has a wax figure in Madame Tussaud’s museum in Amsterdam, Holland.