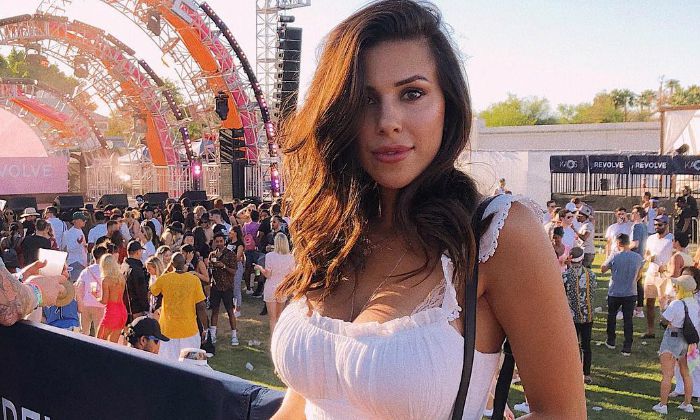 Who is Devin Brugman?

Devin Brugman is an American model, blogger, entrepreneur, and social media star who is best recognized for her entrepreneurial accomplishments with her best friend and business partner, Natasha Oakley. She and her friend Oakley founded “A Bikini A Day” blog in 2012, which covers a wide range of topics including style, fitness, travel and beauty tips. As the name suggests, the blog that is touted to be a bikini destination for bikini lovers became popular down the line, thanks to bikini pictures of Devin and Natasha. The duo launched their own bikini brand called Monday Swimwear in 2015 that has a huge collection of swimwear and beachwear. Her Instagram handle has earned over 1.3 million followers, courtesy of her bikini pictures shot at exotic locations across the globe.

Devin Brugman was born on the 26th of December 1990, in Oakland, California, United States of America. She is currently 29 years old.

Speaking about her personal life, not much is known about her parents and her early life at this time of the hour. Her father is a businessman while her mother was a former model. It appears that she is the only child to parents.

Her family moved to Maui, Hawaii from California when she was 4 years old where she completed her school education. After that, she moved to Los Angeles to further studies as well as in search of a promising career. She studied business at Mount St. Mary’s University, following in her father’s footsteps, who is an MBA graduate.

Talking about her relationships, Devin Brugman is currently in a relationship with a guy named Daniel Yaro, whose identity hasn’t been revealed. In an interview, she told that her boyfriend is a very cool and easy-going character. Other than that, she didn’t reveal anything about him, including his profession. They both often be seen going out together with Yaro’s Instagram page packed with their pictures.

Before Daniel came into her life, she dated American Football Player Gregg Little in 2013, a relationship that lasted only for few months. Several media outlets reported that it was due to Gregg’s financial status, the couple split.

Devin Brugman started out as a model and took up some modeling consignments before attaining fame. Her career took a shift turn when she and her friend Natasha Oakley went on an exotic vacation, having just packed their bikinis. They uploaded some gorgeous and spell-binding pictures of themselves in bikinis on their respective Instagram pages while enjoying their vacation.

It didn’t take long for them to gain popularity on Instagram with their bikini pictures becoming a delight for everyone including modeling agencies and fashion houses. One such modeling agency contacted them and offered a professional photographer for their shoot.

Dubbed as “bikini girls”, Devin and Natasha launched a full-fledged fashion blog called ‘A Bikini A Day’ in 2012. In other words, what you can call it as a ‘bikini world’, where you can find everything related to bikinis. Also, the duo embraces their curvaceous figure and natural beauty by flaunting a bikini each day on the blog.

In 2014, the girls came out with their own line of bikinis called ‘Monday Swimwear” an exclusive online store for bikinis. It has a huge range of swimwear and beachwear collections and designs. The latest collection to be introduced is “Monday Active”, a range of gym and activewear clothes.

According to sources, Devin Brugman’s net worth is estimated to be around $300 thousand, but it is likely to grow steadily in the years to come, as their brand has already established itself to be one of the top brands in the US. It is one of the most sought after brands among the bikini connoisseurs.

With no doubt, Devin’s entrepreneurial abilities come from her parents as both of them are successful business people.

When Devin decided to pursue modeling, her parents didn’t object rather encouraged and supported her modeling ventures as her mother was a former model.

She clubbed her modeling abilities and business skills to become one of the most successful entrepreneurs in the fashion industry.

Devin met her friend and future business partner, Natasha Oakley in 2009 in Maui.

They rebranded their infamous blog “A Bikini A Day” to “The Swim Report” in 2018. It was featured in distinguished publications such as Cosmopolitan and Harpers Bazaar.

Devin’s swimwear brand “Monday Swimwear” was featured among the “top seven US swimwear brands for women” by the Evening Standard.

Famous actor and filmmaker, James Franco is her celebrity crush.

She is a foodie and her favorite food is pasta.