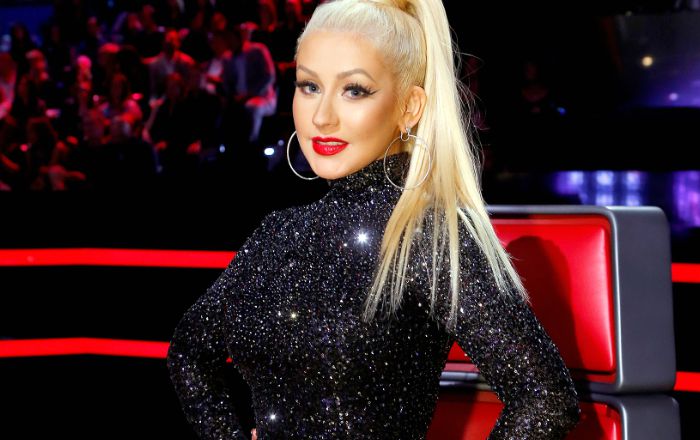 Who is Christina Aguilera?

American singer Christina Aguilera who rose to prominence with her singles “Genie in a Bottle”, “What a Girl Wants”, and “Come On Over Baby (All I Want Is You)” that peaked at number one on US Billboard Hot 100. Throughout her music career, she has earned five Grammy Awards, one Latin Grammy Award, and was inducted into the Hollywood Walk of Fame. She is one of the best selling artists of all time, having sold more than 50 million records worldwide since her debut. Aguilera has also appeared in films and TV shows including Burlesque, Pitch Perfect 2, The Voice and Nashville.

Christina Aguilera was born on the 18th of December 1980, in Staten Island, New York, United States of America. She is currently 39 years old.

She spent most of her childhood living in various places including New Jersey, Texas, New York, and Japan. Her parents divorced when she was six years old and as a result, she and her younger sister was taken custody by her mother and moved into her grandmother’s home in Rochester. Shortly after, her mother remarried.

Aguilera was married to music marketing executive Jordan Bratman from 2005 to 2011. They got married on November 19, 2005, in a Napa County estate in California. They have a son named Max Liron Bratman, born in January 2008. The couple called it quits in October 2010 and eventually filed for a divorce, which was finalized on 15 April 2011.

Aguilera is presently dating Matthew Rutler, who served as an assistant on the set of Burlesque. They got engaged on Valentine’s day 2014 and have been since living together. The couple welcomed their first child, a daughter, Summer Rain Rutler, on August 16, 2014.

Christina Aguilera released her eponymous debut album on 24 August 1999, peaking at number one on the Billboard 200 and was certified eight times platinum. The album’s lead singles  “Genie in a Bottle”, “What a Girl Wants” and “Come On Over Baby (All I Want Is You)” reached number one on Billboard Hot 100. The album earned her a Grammy Award for Best New Artist.

She has since released eight studio albums ad they are –

Christina Aguilera debuted as a voice actress in the 2004 film Shark Tale where she voiced the character Rastafarian jellyfish.

In 2008, she starred as herself in a documentary titled Shine a Light. Her first role as a leading actress came in 2010 when she was cast as Ali Rose in the film Burlesque.

Aguilera first appeared as a contestant in a reality show Star Search in 1990. Following that, she starred as herself in Season 6 and 7 of The Mickey Mouse Club House from 1993 to 1995, marking her debut in TV series.

She is well known for her singing talents and her appearance as a coach on the singing reality show, The Voice from 2011 to 2016.

Aguilera has a net worth of $160 million as of 2019. This makes her one of the wealthiest singers in the business. She was paid $15 million per year for her work as a coach on the reality show, The Voice. She is a high-profile celebrity endorser and was paid reportedly paid $1.5 million by People magazine for her baby pictures, which became the ninth most expensive celebrity baby photographs ever taken.

Christina earns from endorsement apart form singing, acting, world tours, and album sales. She currently lives with her family in Beverly Hills, California, U.S. She owns many cars of which the black Range Rover is her favorite.

Aguilera aspired to be a singer when she was young and participated in local talent shows and competitions. She was known locally as “the little girl with the big voice”.

Her professional singing career kick-started at the age of 14 in The Mickey Mouse Club. her co-stars were Ryan Gosling, Britney Spears, and Justin Timberlake.

Aguilera is a soprano, having a vocal range spanning four octaves (from B♭2 to C♯7), four notes, a semitone, and the whistle register.

She has credited blues singer Etta James as her main influence and inspiration.

Besides English, Aguilera sings in Spanish and French. She released her Spanish album titled Mi Reflejo in 2000 which topped the Billboard Top Latin Albums and earned her the Latin Grammy Award for Best Female Pop Vocal Album at the 2001 ceremony.

Aguilera is considered a pop icon and has frequently garnered comparisons to Britney Spears. She is also regarded as a sex symbol.

She recorded songs for a number of movies and cartoons: ‘Hunger Games’, ‘Shark Tale’, ‘Mulan’, ‘Moulin Rouge’, ‘Burlesque’ and others.

In 2009, she ranked at number 58 on Rolling Stone’s list of 100 Greatest Singers of All Time, thereby becoming the youngest and the only artist under 30 to be named.

In November 2010, Aguilera was honored with a star on the Hollywood Walk of Fame.

Billboard recognized her as the 20th most successful artist of the 2000s, and Time listed Aguilera among the top 100 Most Influential People in the World of 2013.

Aguilera is the No. 1 awarded celebrity brand, winner of 13 awards globally. She has launched her own line of fragrances worldwide from late 2004.