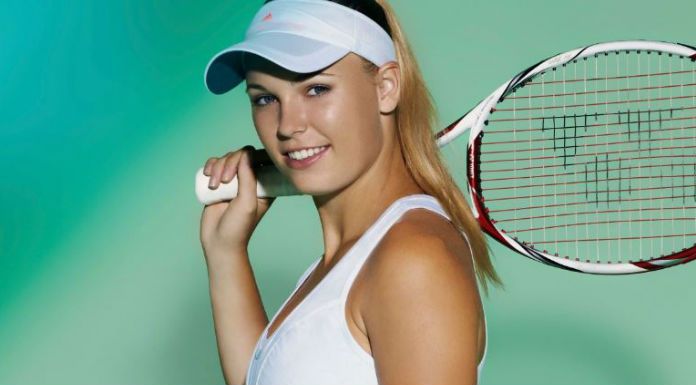 Who is Caroline Wozniacki?

Caroline Wozniacki is a good looking and talented tennis player from Denmark who has won several tournaments since her inception in 2005. She is one of the few marketable athletes in the world of all sports who make tons of money from tennis and brand endorsements. She held the no. 1 ranking on the WTA list for about 69 weeks and the first Scandinavian woman tennis professional to achieve the feat and 20th overall.

Wozniacki has been bestowed with 25 WTA singles titles, comprising six titles in 2010 and 2011, the maximum received in a year by a WTA player from period 2008–2011. Caroline Wozniacki’s playing style focuses on the defensive features of tennis games with her expectation, movement, quickness, footwork, and speed all first-rate as well as key parts of her tennis game. Wozniacki’s defensive playing style has her colleagues labeled her as a counter-puncher.

Caroline Wozniacki was born on the 11th of July 1990, in Odense, Denmark. She is currently 29 years old.

Caroline Wozniacki comes from a family of athletes. Her father, Piotr Woźniacki, played professional football and her mother, Anna, played for the Polish women’s national volleyball team. Her parents originally from Poland immigrated to Denmark after Piotr signed for the Danish football club Boldklubben 1909. Her older brother, Patrik Wozniacki, was also a professional footballer, who played in tournaments in Denmark.

Concerning about her educational qualifications, nothing has she revealed to the media.

Wozniacki dated Irish professional golfer, Rory McIlroy from 2011 to 2014. She announced her engagement on the 1st of January 2014 on her Twitter, and McIlroy eventually ended his relationship with her on May 1, 2014. He stated, “The problem is mine. The wedding invitations issued at the weekend made me realize that I wasn’t ready for all that marriage entails. I wish Caroline all the happiness she deserves and I thank her for the great times we’ve had”.

There were reports of rumors that Wozniacki was in a relationship with Feliciano Lopez in 2014 after her break-up with Rory McIlroy. But, there was no evidence to prove the claim.

In 2015, Caroline had a fling with American NFL player J. J. Watt but it was short-lived.

Wozniacki started dating with former NBA champion and current San Antonio Spurs player David Lee in 2016. The couple came forward in February 2017 when they shared roses and kisses on Valentine’s day. It was later confirmed by her family that they both are in a relationship and soon will get into wedlock. Shortly after making their love life public, Wozniacki has been spotted with her beau David when they made out to Italy on a romantic vacation.

The couple got engaged on 2 November 2017 and married on 16 June 2019 in Tuscany. the wedding ceremony was attended Angelique Kerber, Agnieszka Radwanska and Urszula Radwanska with Serena Williams being one of her bridesmaids.

Wozniacki made her debut on the WTA Tour against the top-seeded Patty Schnyder at Cincinnati’s Western & Southern Financial Group Women’s Open on 19 July 2005, but she lost to her in the first round.

Caroline’s first TV appearance was in the TV series DR2 Premiere in 2008 as herself. She showed up in episode #9 of season 1.

As an actress, she was first seen in the comedy-drama series Ballers as herself in an episode entitled “Enter the Temple”.

Wozniacki has been associated with a number of brands and products during her stint as the pro, including Adidas, Compeed, Rolex, Danske Invest, Oriflame, Proactiv, Sony Ericsson, Babolat, and e-Boks.

On December 20, 2010, Caroline signed an agreement with Turkish Airlines to endorse their business class service.

In 2012, she signed a deal with Compeed Blister Patch and in 2015 with Godiva Chocolatier.

In 2013, She began to endorse Babolat brand racquets. She was previously promoting Yonex products.

Wozniacki has been on the courts for over a decade and has apparently won several tournaments and cash prizes since 2005. Caroline Wozniacki’s net worth is estimated to be $30 million US dollars, which is self-made that come from her tennis games, brand endorsements, investments. She has won prize money about the US $33,908,784 to this date.

Caroline Wozniacki has some exotic collection of cars in her garage, including a prominent red Ferrari, an Audi and a Porsche 911 Carrera.

She has an elegantly designed Villa at Monte Carlo, Monaco with a swimming pool which is estimated to be $10 million US dollars.

She made her debut on the WTA Tour in 2005 but eventually, she came out in the first round, losing to Patty Schnyder.

She has been to the Grand Slam finals twice but hasn’t yet grabbed one for her.

In 2001, Forbes named as the world’s second highest-earning female athlete.

In November 2014, Wozniacki made her marathon debut, completing the New York City Marathon in a time of 3:26:33.

Wozniacki is fluent in Danish, English, and Polish languages.

She was very much interested in soccer who once said that she would have been a Soccer player if she was a guy.

She has a dog named Bruno.

Caroline is the winner of the 2014 US Open Sportsmanship Award.

Talking to Teen Vogue magazine in 200877, she said, “I like handball, soccer, swimming, playing the piano, and all kinds of different things.”

Wozniacki and Agnieszka Radwańska have met 16 times with Wozniacki leading the head to head 11– 6 while Wozniacki leads 9–6 on hard courts and 2–0 on clay. They both played last at the 2017 Qatar Total Open where Wozniacki won in straight sets.